Compass Box recently launched its latest limited edition Magic Cask Blended Malt Scotch Whisky. Made from a blend of Speyside malt whiskies, Magic Cask, it is said, “takes its defining character from the inclusion of whisky from one Sherry-seasoned cask.”

In 2016, Compass Box re-racked what is says was one-year-old malt spirit into a first fill Oloroso-seasoned butts. By 2019, one cask – #2 – caught their eye and they began to experiment. 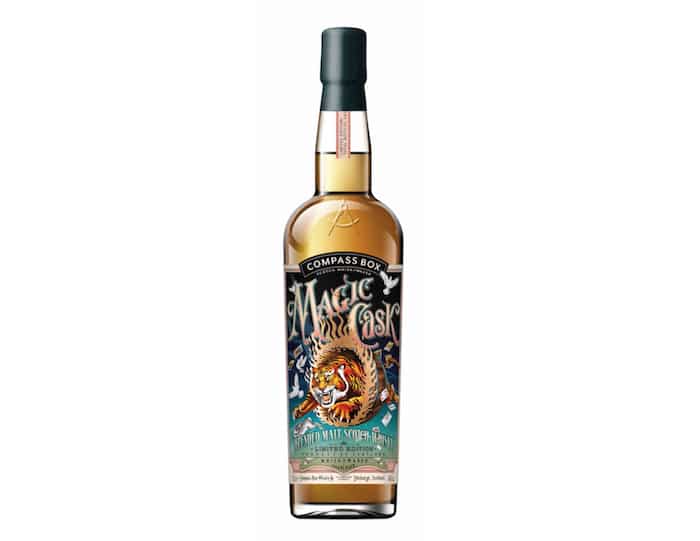 “Sometimes just one cask in a blend of many can provide the touch of magic that allows the whole arrangement to sing,” Compass Box Founder and Whiskymaker John Glaser said in a prepared statement. “We first took advantage of this phenomenon in 2006 when an experimental whisky, finished in an ex-Madeira barrique, led to the Limited Edition bottling we called Magic Cask.

“We’re delighted to be able to share with you again the magical influence of one exceptional cask – a Sherry-seasoned cask in this case – can have on a recipe.”

“We have had samples of whisky from the lost Imperial Distillery in our Blending Room for some time,” added Whiskymaker James Saxon. “Aged in first fill Bourbon barrels, the spirit is brimming with fruit and vanilla notes and exhibits a lovely tongue-clinging texture. However, finding the right project and accompaniments to this parcel of single malt proved a challenge

“Then, last year, we discovered cask #2 amongst samples drawn from our 2016 Sherry cask maturation experiment. Full to the brim with cherry fruit and cedar spice character, it was a remarkably precocious whisky. When combined with the parcel from the lost distillery, it created an exceptionally rich and layered blended malt Scotch whisky.”

The bottles are 46% ABV, with just 5,538 made that each price at £145, or around $200 USD. You’ll find some official tasting notes below, and it should also be noted this expression is of. natural color and non-chill filtered.

Aromas of marmalade and chai tea spices, with hints of plum. Ripe golden dessert apples dominate the luscious palate, supported by an oaky richness. Flavours of toffee and cocoa powder are also conjured up.