Compass Box Offers Up New Limited Edition “No Name, No. 3”

Compass Box Whisky is punching up the peat in the recently announced latest release of its limited edition Scotch whisky,  “No Name, No. 3.”

This final creation in the No Name series looks to bring a new smoky experience to the trio with 10,794 bottles available worldwide starting this month.

“No Name was not intended to become a series, but we have thoroughly enjoyed showcasing different heavily-peated malt whiskies within a consistent recipe structure,” said John Glaser, Compass Box founder and whisky maker, in a prepared statement. “The interplay of smokiness between all three blends is completely different, showing that peat is far from one-dimensional. No Name, No. 3 showcases a rich intensity that makes it vibrant and expansive, with a wild yet graceful peatiness.” 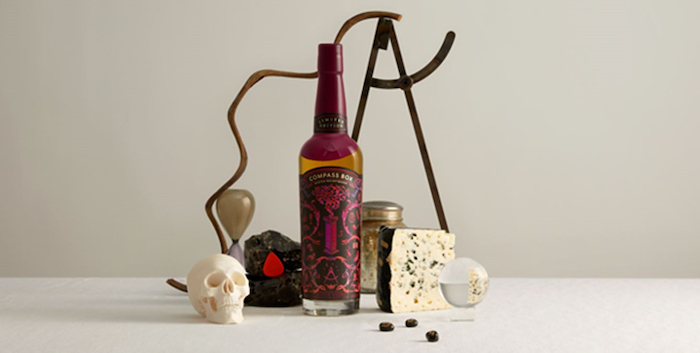 Compass Box No Name, No. 3 (image via Compass Box)

He said that No Name, No. 3 completes a “compelling trilogy, and we are excited for fans of this style to try it.”

The whisky makers call this a “big-boned and peaty whisky,” as No Name, No. 3 boasts what’s described as richness and tropical characteristics. Bottled at 48.9% ABV, this expression is based around malt whisky from the Laphroaig Distillery, aged in re-charred hogsheads.

Waxy, fruity and sooty malt whisky from the Bowmore Distillery supports this blend. Fruity and silky unpeated malts, and a little of the Compass Box Highland Malt Blend, complete the composition.

James Saxon, lead whisky maker for No Name, No. 3, said the result is a blend with a seashore smokiness, backed by baked pear and pineapple notes. Aromas and flavors reminiscent of the patisserie and the smokehouse offer a rewarding and complex experience. He said it could be enjoyed neat alongside a full-bodied blue cheese.

The label, designed by Stranger and Stranger, lends itself to the holiday season with bold, contrasting colors reflective of the flavors within the whisky. The whisky will retail for $130.

American ex-pat John Glaser is the founder and head whisky maker of Compass Box and six-time Whisky Magazine Innovator of the Year.

He began his career on a path to become a winemaker, before re-routing himself through the corporate world to become a marketing director for Johnnie Walker in London. John started Compass Box from the kitchen of his west London home in 2000 and worked with a vision to create one of Scotland’s most compelling whisky companies.

In 2020, John was inducted into the Whisky Magazine’s Hall of Fame. Compass Box has two blending rooms in London, a team of 20 working internationally and stocks of maturing whiskies in Scotland.