Compass Box The Circus Blended Scotch Is Not Clowning Around 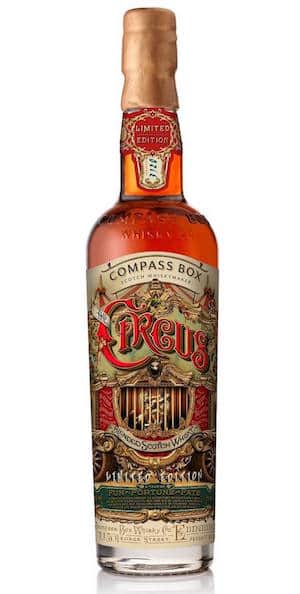 Back in 2014, we wrote about the highly regarded The General blended Scotch whisky from independent bottler Compass Box. It was a heavy hitter for the company at the time, blending two parcels of whisky that had been matured for 40 and 33 years, respectively. Fast forward to now and they are back with what’s said to be a comparative new offering dubbed The Circus.

Compass Box The Circus, released at the same time as Enlightenment, brings together into one bottle what’s described as “old parcels of blended Scotch and blended grain whisky that had been aged pre-blended in cask for many years.” It is also said to contain “a small proportion of single malt whisky from the Glen Ord distillery.”

There’s no more specific information about the spirits that make up this blend, as Compass Box indicated they don’t really know themselves. As for other specifics, this non-age statement expression is bottled at 49% ABV and is both non-chill filtered and of natural color.

As many of the marrying casks were sherry butts, you can definitely expect that sherry influence in the overall makeup of this bottling. Limited tasting notes from Compass Box indicate The Circus has “a lithe frame and opulent mouthfeel showcasing the supple softness of mature grain and the complexity of aged Blended Scotch Whisky. Brimming with dried fruit character, a luscious maltiness and nuances of almond and hazelnut.”

Compass Box The Circus, so named after the 1928 Charlie Chaplin silent movie, is a limited release in scope, with only 2,490 bottles being produced. It is being released in the UK, parts of Europe and the United States, with a price point of around £190, or about $275 USD.