Scotland’s Cask 88 recently added its fourth release to an award-winning series of whiskies inspired by the legends of Scottish folklore, this time adding the legend of the nightmarish Nuckelavee to its books.

The 31 Year Old Orkney Island 1988 Single Malt is distilled at Highland Park and matured in a refill sherry cask, before finishing in an ex-Riversaltes fortified French wine hogshead. Containing what’s said by the brand to be aromas of camphor, sandalwood, Amaretto, dried prunes and freeze-dried strawberries, the whiskey gives a taste of marzipan icing, raspberry jam, Mexican candies and Tamarind candy with a soft dusting of salt and chili powder, followed by a cinnamon red-hot. The finish depends on where you focus your attention and could be anywhere from sweet to spicy to salty. 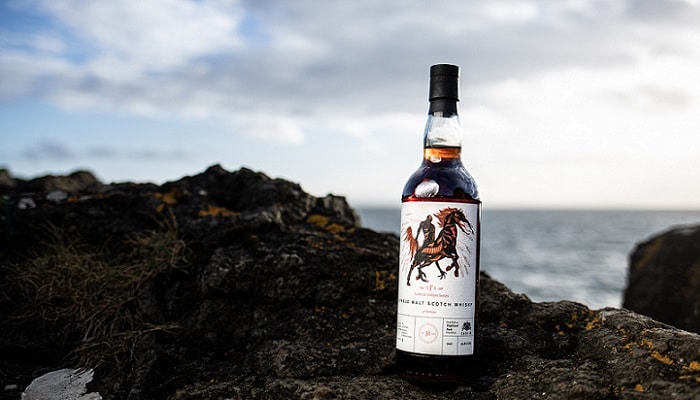 “Our Scottish Folklore Series was conceived to showcase the very finest of Scotland’s single malts and the selection so far truly lives up to the original version,” Cask 88 Director Patrick Costello said in a prepared statement. “The double finishing of this whisky gives it a deep and complex flavor profile that we feel is well suited to capture the brooding darkness of the Nuckelavee.”

The Nuckelavee is a mythical sea creature that appears as a horse-like demon that combines equine and human elements. Its breath was thought to wilt crops and sicken livestock and was considered responsible for epidemics and drought. The new whiskey follows the 45 Year Old Ben Nevis 1972 Single Malt, 22 Year Old Arran 1997 Single Malt and 19 Year Old Laphroaig 2001 Single Malt.

The Scottish Folklore Series is intended to bond the stories of Scotland’s unique history with the finest expressions of its spirit and will contain six single cask expressions, featuring a mythical entity who has roamed the highlands, stalked the lowlands or inhibited the islands.

“People often speak of terroir in whisky these days. In Scotland, every patch of turf has a connection to a shadowy figure or two from folklore,” noted Cask 88 Head of Content Sam Laing. “It’s been so wonderful to learn the old stories about the places our whiskey comes from.”

The 31 Year Old Orkney Island 1988 Single Malt is available to purchase through the Cask 88 website, bottled at 45.8% ABV and priced around £950, or about $1,300 USD. More complete official tasting notes can be found below.

Nose – The first whiff is perfumed and woody, like camphor and sandalwood. The almondy essence of Amaretto follows, but drier. As you get closer, however, sweeter notes of dried prunes and freeze-dried strawberries lurk.

Palate – It leads with sweetness: a thick layer of marzipan icing and raspberry jam, slowly peeled away from a fruitcake. A hint of smoke rolls in, like a roast dinner charring in another room. Then the sweetness changes, becoming more savoury like Mexican candies. Tamarind candy with a soft dusting of salt and chilli powder, followed by a cinnamon red-hot.

Finish – The finish is, unsurprisingly, long. Depending on where you focus your attention you may find sweetness, savour, smoke, spice or a soupcon of sea salt. Enjoy it: it’ll be different after the next sip.