Bruichladdich Octomore 7.1 One Hell Of A Peaty Scotch 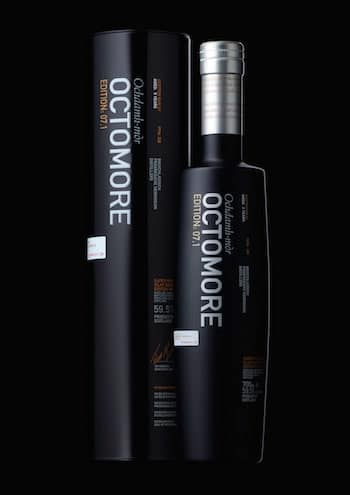 The Bruichladdich distillery, which recently saw its legendary master distiller Jim McEwan announce his retirement after 52 years in the industry, has a whisky line among its Scotch choices which is all about the peat. In fact, the more peaty, the better, for its Octomore series. Now coming to this brand is a new release known as Bruichladdich Octomore 7.1.

Octomore 7.1, much like the recently released into travel retail channels Octomore 7.2, clocks in at a hefty 208 ppm on the peaty scale. In other words, expect this seventh edition of Bruichaddich’s cult single malt to be as about chewy as it gets, given the the raw power of the massive phenols in this bottling.

7.1, according to the distillery, was released at five years of age after maturing in American oak and being bottled at 59.5% ABV without chill filtration. It was crafted from barley sourced from the Scottish mainland and represents one of the last expressions created under the watch of McEwan.

Speaking of McEwan, here is how he outlined tasting notes for this Scotch, according to Bruichladdich. He says it much better than I can type it:

Jim describes the nose as: “Like sea spray and caramel, lemon balm and pipe tobacco.  Slowly, the peat rises from the glass, gentle but strong, lifting vanilla, mint, toffee, golden syrup and almond.”  On the palate, he finds: “Smoothness, sweetness and then smoke.  A texture like no other, satin soft and devilishly warming.  The American oak influence is in perfect tune with the smoke and soft fruits that have been delicately coaxed from the still during an exceptionally slow distillation.”

All Octomore is matured for all of its life in warehouses close to Loch Indaal and this marine influence is reflected in the mood created by this remarkable new single malt..  Jim concludes by saying:  “The feeling is of long summer nights turning cooler as autumn approaches.  This dram will transport you to Islay, to watch the sun setting over the sea while breathing in the peat smoke hanging in the air.”

There was no immediate mention of price for Octomore 7.1, but it is for sale directly from the distillery for around £91 ($145 USD approximately). It is already available overseas at a variety of retailers, and should appear in the US eventually.