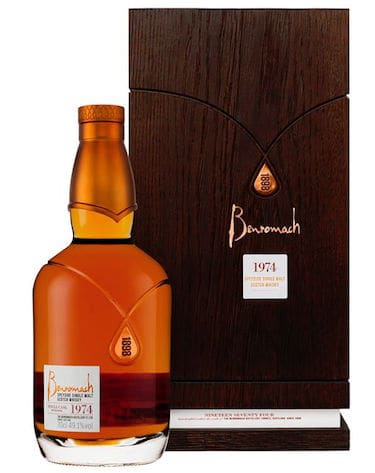 Scotland’s Benromach distillery, founded in 1898 in the famous Speyside whisky region, went through a number of ownership changes over the years before being shuttered in 1983. It was eventually acquired once again by new owners and reopened in 1998, still stocked with aging Scotch from its previous incarnation. One such rare offering has just been made available to the public in the form of Benromach 1974.

Benromach 1974, according to the distillery, is a single cask bottling which emerged from a sherry butt laid down some 41 years ago. This whisky is thus over four decades old, with only 452 bottles being made available. It is described as having “a beautiful golden amber” color as a result of of its sherry cask aging.

Presentation-wise, this release comes in a special decanter-style bottle that’s housed in a slick presentation box. A book accompanies the scotch, telling you about the distillery’s history and the stories of some of the people behind the whisky. Official tasting notes for this are below, and should you wish to secure one expect to pay around £1,200, or about $1,700 USD.

“Benromach 1974, cask number 1583, is incredibly rare, as very few casks of Benromach remain from that time,” said Benromach Distillery Manager Keith Cruickshank in a statement. “This whisky has matured for many years in a single sherry butt and we have now decided to release it for savouring and enjoying today. For all of us at the distillery, this is a moment to be treasured.”

Enjoy the opulent sherry influences infused with plump sultana, sharp green apple and zesty orange peel aromas. Underlying all these are rich hints of beeswax polish and menthol. Now take a sip. At first, you may taste ripe banana, succulent raspberries and blackcurrants. These develop into hints of dark chocolate, leading to a long and smooth finish.

Add a few drops of water and take time to enjoy the nose as it develops… fragrant pear and apricot aromas follow the sherry notes, with developing hints of sweet-sharp candied orange peel and beeswax polish. Now lift it to your lips and enjoy a slow sip… a veritable fruit bowl of bananas, pears and red apples emerges, complemented by hints of charred oak.

Finally, a superb liquorice and dark praline edge combines with a trace of smoke on the finish. Sublime.