There are just a handful of so-called Malt Masters in Scotland, craftsmen at the top of their trade in regards to getting it really, really right in the art of crafting Scotch whisky. The Balvenie’s David Stewart, at 53 years in the industry, is the most senior of his peers and he, like fellow global whiskey legends Jim Rutledge and Jimmy McEwan, is ready to ride off into a brown spirit sunset. He is going out with a bang though, unveiling an uber-luxury collection of Scotches known as The Balvenie DCS Compendium.

The Balvenie DCS Compendium, according to the distillery, will consist of 25 single cask releases and an accompanying book telling Stewart’s history making whisky. The collection will be released over a five year period in five annual “chapter sets,” with each set showing off five individual casks which are tied to a theme of each chapter in the book. 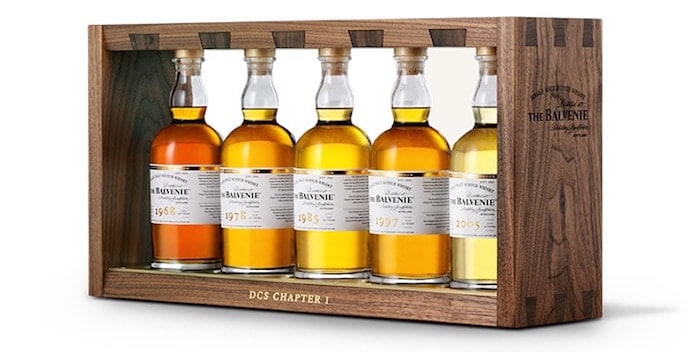 The entire collection consists of rare The Balvenie whiskies distilled between 1961 and 2009 which range in age from a minimum of 8 years to over 50. The first set (which is detailed in depth below) is available now in very limited numbers, and housed in a handmade walnut and brass presentation frame. Besides the set, individual bottlings can also be purchased, and will be available in their own single walnut presentation frames.

“I had a good idea which ones were destined to be part of this collection,” said Stewart in a statement, “even if it took some work and time to track them down. I had to leaf through ledgers, search computer records, and had to hop, quite literally, barrel over barrel to seek them out in the various warehouses.”

You can learn more about this crazy whisky series through an in-depth article over at Bloomberg.