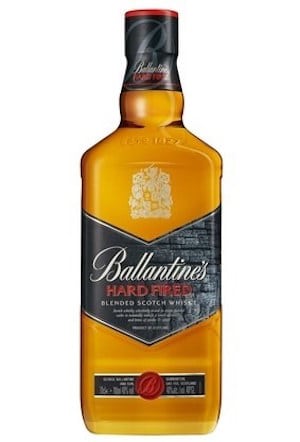 Ballantine’s blended Scotch is looking to add a harder edge to its whisky line up. That is to say, they are debuting a new product known as Hard Fired, so named because it is a double charred expression “aimed at whisky drinkers seeking authenticity and craftsmanship in new Scotch styles.”

Ballantine’s Hard Fired, according to those behind it, comes about as a result of first taking select American oak barrels and sending them to the cooperage for a second charring. This process, called “hard firing,” involves the char length and intensity being “judged by site.” After this is done the re-charred barrels are then nosed and the best of them are chosen to be filled with blended whisky for an unspecified amount of maturation.

“Ballantine’s Hard Fired showcases the natural and unique results that American oak and fire produce on Scotch whisky,” said Ballantine’s Master Blender Sandy Hyslop in a statement. “When charred, casks form a natural layer of caramelised wood sugars that react with whisky and a double char understandably intensifies this effect.”

The result is a smooth, creamy and subtly smoky Scotch whisky with tasting notes of sweet honey, soft red apples and tangy liquorice. This balanced flavour profile results in a premium whisky that sits well within the Ballantine’s family style while offering something new.”

Hard Fired from Ballantine’s should be available globally by next March.