Gordon & Macphail recently revealed the last in its whisky series of four bottlings commemorating its 125th anniversary: The Gordon & MacPhail 1975 Glencraig from Glenburgie Distillery. Each of the four are from the last remaining casks from lost or closed distilleries, matured in Gordon & MacPhail’s famed warehouse.

The whisky was distilled in Lomond stills, which operated in Speyside’s Glenburgie Distillery before production stopped after 23 years of operation. Most of these Gelncraig whiskies were destined for blended malts. 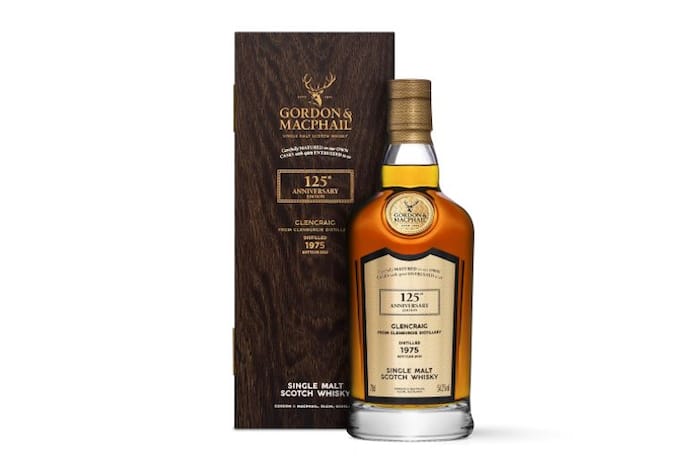 For this particular release it was matured in a refill American hogshead cask, with its initial light and fruity new make spirit developing into what’s described as a warming, citrusy single malt with a delicate herbal edge. Only 110 bottles were created from what was laid down back in 1975 — each with an alcohol by volume of 54.2%.

“While it’s bittersweet to share the last remaining drops of these ultra-rare whiskies, they embody a fitting tribute to 125 years spent in pursuit of perfection,” Stephen Rankin, the company’s Director of Prestige, said, in a prepared statement. “These four releases provide a personal legacy for all who have worked at Gordon & MacPhail over the decades culminating in these exquisite and unique drams found nowhere else.”

Gordon & MacPhail also recently launched a new film serialization that tells the company’s story of 125 years in the industry. The ‘Chapters’ series of five short films includes 20 contributors and whisky writer Charlie Maclean. It can be viewed at the company’s website.

The Gordon & MacPhail 1975 Glencraig from Glenburgie Distillery is pricing at £1500, or around $2,020 USD. You’ll find some official tasting notes below.

18
Shares
3.7k
Views
Share on FacebookShare on TwitterGet Our Newsletter
Get The Macallan® Rare Cask at ReserveBar. Shop now!