The new addition is a 26-year-old whisky, matured in American and European oak casks at the Glenfiddich Distillery in Dufftown, Scotland. The crowning glory for this whisky, though, sees a marriage of maturation and finishing as the Grande Couronne spends another two years in sourced French Cognac casks. 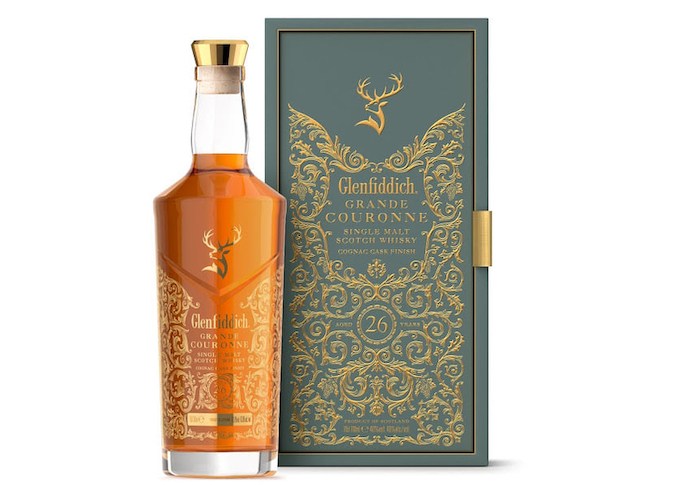 “The Grand Series perfectly encapsulates Glenfiddich’s spirit of innovation and our ability to experiment with aged liquid and intriguing finishes. Grande Couronne is the latest to exemplify that approach,” said Glenfiddich Malt Master Brian Kinsman in a prepared statement. “It’s the only Glenfiddich single malt that has matured in American and European oak casks and finished in rare French Cognac casks. The length of the finish, two years, is highly unusual and adds extra layers of sweet toasted oak and velvety aromas of café crème, brown sugar and soft spice.”

The Grande Couronne bottle is wrapped in a filigree gold print and placed in an embossed box with a scene reminiscent of the spirit of the French court.

“Grande Couronne is created with opulence in mind at every step, from its conception to bottling,” said Glenfiddich Brand Director Michael Giardina. “With this single malt, we are sharing something perfectly decadent and worthy of indulgence when celebrating life’s extraordinary moments.”

Grande Couronne, which was first released overseas earlier this year, is available now in the United States at a suggested retail price of $600.

172
Shares
4.1k
Views
Share on FacebookShare on TwitterGet Our Newsletter
Get The Macallan® Rare Cask at ReserveBar. Shop now!