Northern Ireland, for all intents and purposes, is Bushmills country. The iconic Irish whiskey brand is produced at what is said to be one of the oldest distilleries in the world, dating back hundreds of years. But they may no longer be the only game in town. A young, upstart craft operation is now looking to shake up the Northern Ireland whiskey landscape, with plans to release its first bottlings within three years.

Rademon Estate Distillery, based in County Down, Northern Ireland and founded in 2012, has made something of a name for itself through its award-winning Shortcross Gin. The move to whiskey involves bigger efforts, however, and it was just this summer the first casks of their new small-batch Irish whiskey were sealed up and put down for maturation. 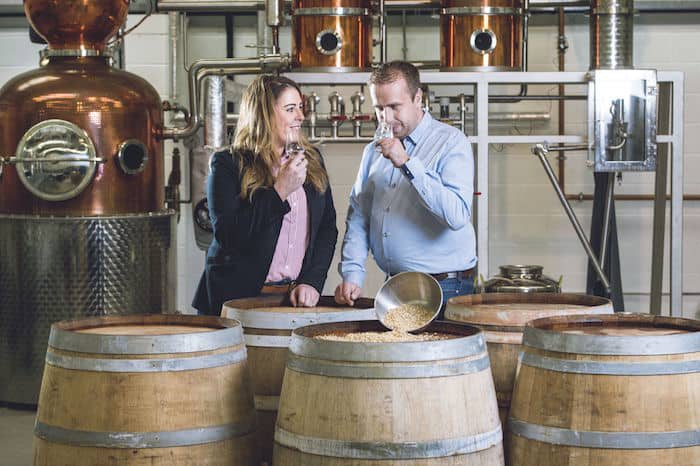 Husband and wife team Fiona and David Boyd-Armstrong have plans to cask around 100 barrels of their whiskey by the end of this year. They are aiming to craft a so-called Irish Malt Whiskey, a style they feel is under-represented in a market dominated by pot still and grain expressions.

“I am thrilled we have developed what I know will be a fantastic Irish Malt Whiskey and I’m greatly looking forward to August 2018 when we will be able to sample our first three year old Irish Malt Whiskey,” said David Boyd-Armstrong in a statement. “This style of whiskey is a personal favourite of mine due to the complex flavour profile and I feel it is under represented in the market.”

The Boyd-Armstrongs are striving to keep control of as much of the whiskey making process as possible:

all aspects of production for the new Irish malt whiskey, from grain to glass, will be performed on site with no third party spirit being used. The whiskey will be matured in a variety of casks, which the distillery hopes will allow new and innovative flavours and aromas to be created and water from the estate’s own well will be used.

To facilitate this growth, they’re beginning a significant expansion that includes “larger pot stills and associated equipment that will give the distillery a capacity of 35,000 litres of pure alcohol per annum,” as well as a visitors’ center.