Popular Irish whiskey brand Bushmills has teamed with acoustic guitar manufacturer Lowden Guitars to create a unique guitar series from ex-Irish whiskey barrels and ancient bog oak. The new ‘Bushmills x Lowden’ F-50 guitar, as it will be known, looks really interesting for those into these kind of unique items, but it will set you back a pretty penny at £8,500, or over $10,750 USD.

The ‘Bushmills x Lowden’ F-50 guitar, of which only eight guitars are being made, is made with three types of wood. George Lowden, the founder of Lowden Guitars, personally selected Bushmills barrel wood for the 12th fret and back inlays, the bindings, rosette and head facings; ancient bog oak for the back and sides of the guitar; and sinker redwood for the soundboard. 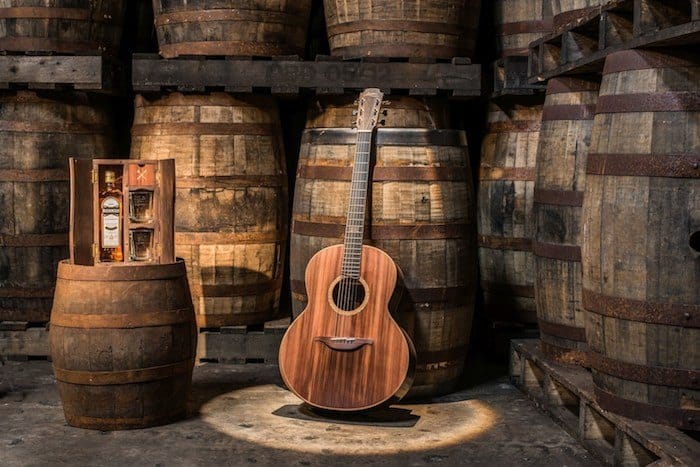 It is said it took Lowden and his sons more than 40 hours to design and build the first guitar. Other features of this unique guitar include a cross symbol formed of a cooper’s hammer and luthier’s chisel, representing the coming together of these two crafts, and, on the back, two lines echoing the staves found in a Bushmills Irish Whiskey barrel and representing “the passing of skills from one generation to the next.”

“We scour the world for the best tonewoods which are the real ‘stars’ of our guitars,” said Lowden in a prepared statement, “determining how they sound, feel, and play, so my sons and I relished the opportunity to work with the Coopers to select the best Bushmills Irish Whiskey barrel wood for the guitar. It was a great opportunity to see up close how the barrels are formed and how they give the whiskey its colour and flavour.”

The three woods used to create the guitar play an integral part in making the Bushmills x Lowden so unique.  Bushmills Irish Whiskey barrel wood is steeped in over 400 years of whiskey making heritage and used throughout to perfectly compliment the other tone woods.  The back and sides are made up of Ancient Bog Oak to offer a mellow, warm sound and when paired with Sinker Redwood on the soundboard, it helps extract a clarity and sparkle from each and every note the guitar produces.”

178
Shares
321
Views
Share on FacebookShare on TwitterGet Our Newsletter
Get Jefferson's Ocean at ReserveBar. Shop now!