Ireland’s Micil Distillery recently brought forth the results of 18 months of development, expanding its portfolio of products, including two new whiskeys.

In a year that saw the laying down of Galway’s first whiskey in more than a hundred years, and the launch of Micil’s Síolta Mhicil Cask Ownership offering, the distiller has launched two new spirits categories with four new releases … two Whiskeys, an Irish cream liqueur and a spiced orange gin.

The independently sourced, finished and bottled range of Micil whiskeys was developed through sourcing mature stocks of Irish whiskey and creating flavor through blending and unique cask iterations. 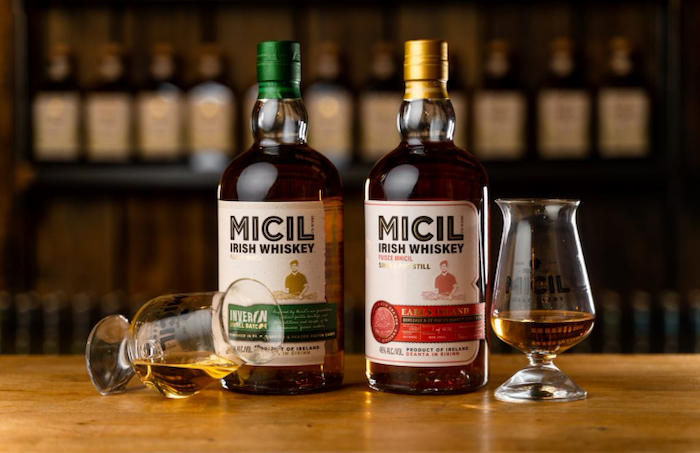 The Micil Inverin Small Batch Blended Irish Whiskey clocks in at 46% ABV and has a suggested retail price of €45 for a 70cl bottle. It’s a five-part peated blend with a triple cask finish, inspired by Micil’s distilling heritage.

The distiller’s notes show that it embodies the fruity spice of Connemara ‘fuisce’ and the peat smoke of the stills & kilns of Inverin. Batch 1 is limited to 8,580 bottles.

The Micil Earls Island Single Pot Still Irish Whiskey comes in at 46% ABV as well and has a suggested retail price of €55 for a 70cl bottle.

The distiller’s notes show this fruity, spicy single pot still Irish whiskey is enriched by Bordeaux red wine casks, with hints of soft turf smoke from ex-peated whiskey casks. It pays homage to the Galway distilleries of the past, and to the Latin wine merchants of old who made the city their home. Batch 1 is limited to 1,140 bottles.

For more than 170 years, the family craft has been handed down through each generation using Irish, which is still the spoken language at the distillery today, and the Micil family represents one of Ireland’s longest unbroken family distilling traditions.

For more information on Micil Distillery & its products, check out www.micildistillery.com.