Extremely popular Irish whiskey label Jameson has something of a treat for its large fanbase as we draw near the end of the year. The brand has announced plans for a very limited edition release of a 21 year old Irish whiskey that will be available for purchase by ballot only.

The new Jameson 21 Years, according to those behind it, “is a blend of rare single pot still and single grain Irish whiskeys that were initially matured in a range of ex-bourbon and oloroso sherry seasoned casks at the Midleton Distillery for 18 years. Following on from that initial period of maturation, these whiskeys were then blended and re-casked into freshly emptied ex-bourbon barrels for an additional three years.

“After a long and complex maturation journey, these casks were then finally married with additional pot still whiskeys that had fully matured for over 21 years in first fill oloroso sherry seasoned wine casks.” 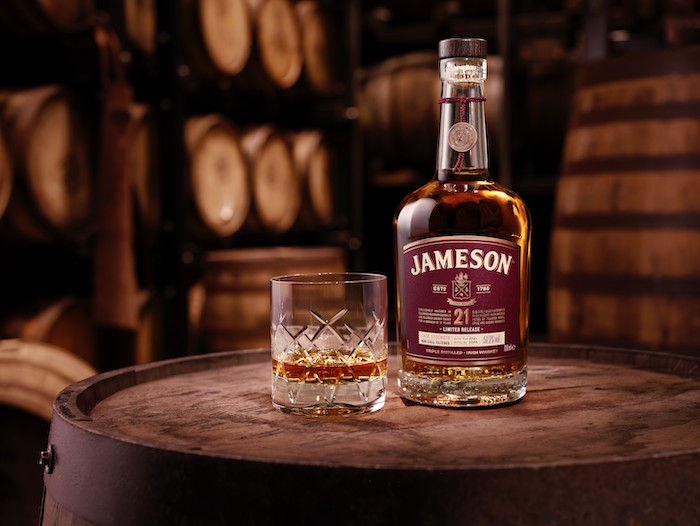 The Irish whiskey, which is bottled at 57.2% ABV, prices at €310. Given there are only 2,301 bottles of it being made available, an online ballot system will come online this week. The first ballot will open to members of Barrel Club Midleton Distillery at 2pm Irish Saving Time (IST) on Wednesday 10th November and the second ballot will open to all other whiskey fans at 2pm (IST) on Thursday 11th of November. Applicants will have until 6pm (IST) on Wednesday 17th November to enter the ballot, with shipping to successful whiskey fans taking place from late November.

It should be noted that shipping of Jameson 21 Years is only available to the following countries: Republic of Ireland, Great Britain, Australia, South Africa, Switzerland, Singapore, China, New Zealand and Japan. If you aren’t in one of them, you are likely out of luck on getting a bottle.

“Following an outstanding awards season for the Jameson family, including Jameson 18 Years Bow Street being awarded a Platinum Medal at the 2021 Beverage Tasting Institute, it seemed fitting that we should further mark this success with the launch of an extra special release,” said Jameson Master Distiller Kevin O’Gorman in a prepared statement. “This delicious whiskey embodies the craft and creativity for which Jameson has always been renowned.

“With such a limited quantity available, we have decided to release the expression via an online ballot which is the fairest way to offer fans of Jameson the chance to get their hands on a bottle of this extra special expression.”

Official tasting notes for this release are as follows.