Walsh Whiskey Distillery is an Irish distillery known for two lines of whiskey from this island nation: Writers’ Tears and the aptly named The Irishman. The latter offering is spread across a number of product line ups, including the more specialized Founder’s Reserve Cask Series, a limited edition series focused upon cask finishing the whiskey in vessels other then what the whiskey was originally aged in. The newest bottling for this series brings into the mix finishing done in ex-rum barrels.

The Irishman Founder’s Reserve Caribbean Cask Finish, according to those behind it, takes Irish whiskey and finishes it for six months in ex-rum barrels from St. Lucia Distillers. The story behind this bottling more specifically is that Walsh Whiskey founder, Bernard Walsh, made a trip in 2014 to the island of Saint Lucia in the West Indies in search of rum casks for a special release. He handpicked 12 oak casks and aged in them St. Lucia Distillers’ Chairman’s Reserve Rum for a minimum of two years from 2015. The casks were subsequently brought to Ireland in the autumn of 2017 and used for the finishing project. 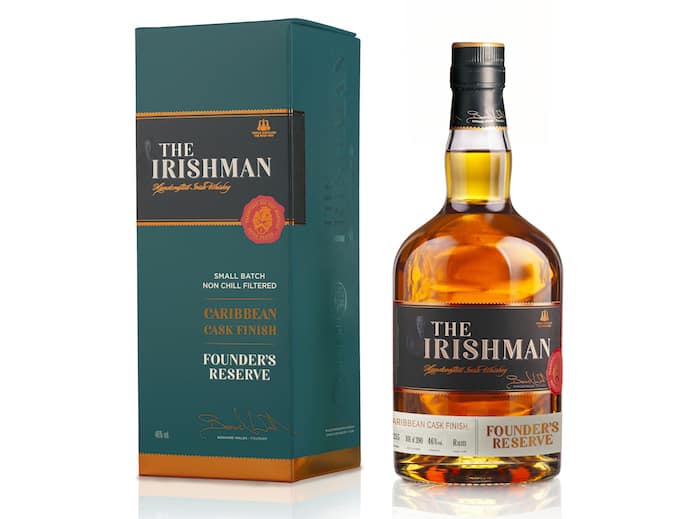 “St. Lucia Distillers, who produce Chairman’s Reserve Rum, are renowned as a prestigious operation first established and run by the Barnard family for almost 90 years,” said John Kelly, commercial director, Walsh Whiskey Distillery, in a prepared statement. “Bernard was confident that he would be able to select from a high quality stock of well cared for casks imbued with a classical rum flavor.”

Caribbean Cask Finish is limited to the 12 casks, each of which sprouted 380 bottles. The entire release, initially aged in American oak barrels and bottled at 46% ABV, is being made available across seven markets, including Ireland, the USA, Canada, Russia, Germany, France and Holland. You’ll find some limited official tasting notes below for your consideration.