Specialty Brands recently announced the launch of Waterford Grattansbrook 1.1, the first Single Farm Origin whiskey from Waterford available exclusively in the U.K. market. The new bottling is non-chill-filtered and aged for over three years and ten months in multiple casks including first-fill, virgin US & French oak.

“Waterford launched to great acclaim last year as the quality of the spirit and its modern, disruptive approach have both resonated with British whisky enthusiasts,” Managing Director of Speciality Brands Chris Seale said in a prepared statement. “We’re thrilled to be releasing the first UK exclusive, Grattansbrook 1.1. This is an exceptional whiskey which really stood out for us and we’re hoping its distinctive character will appeal to whisky drinkers across the country.” 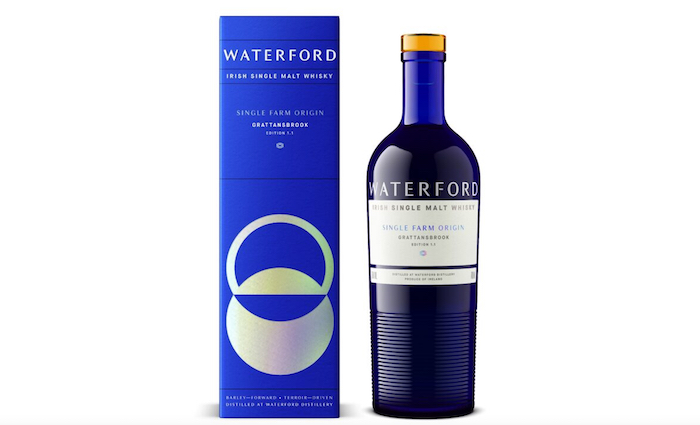 Waterford’s Single Farm Origin series, some of which we’ve reviewed before, explores what’s described as Irish “teireoir” by focusing on different types of barley, grown in different areas of Ireland with various microclimates and growing conditions to demonstrate how it affects the flavor of the whiskey.

The whiskey is the first release from the 2015 harvest of Taberna barley from Grattansbrook farm in Co. Kildare. Situated on a flat, fertile flood plain of the River Barrow, the farm follows the ‘Farming for Nature’ protocol, managing the land to bring biological benefits to its limestone soil.

Each Waterford bottle carries a unique digital number – the TÉIREOIR code – which introduces the Irish farm and its farmers, the casks used to compose the whisky and an array of media.

Grattansbrook 1.1 is available for £70 ($96.31 USD) at specialist retailers and selected on-trade outlets in the United Kingdom. More information on the new release, as well as the Grattansbrook 1.1 teireoir code can be found here. You’ll also find some official tasting notes below.

Waterford Grattansbrook 1.1 Single Malt has a rich texture with a dry and oily finish. Notes of raisins, cocoa powder, marzipan, green tea, white grapes and brown sugar can be found on the nose, accompanied by citrus zest, toffee, exotic spices and banana on the palate.

3
Shares
670
Views
Share on FacebookShare on TwitterGet Our Newsletter
Get The Macallan® Rare Cask at ReserveBar. Shop now!