A year after breaking ground, Ireland’s Sliabh Liag Distillers recently completed its first distillation of whiskey at the new facility in the town of Ardana, along Donegal’s Wild Atlantic Way.

This is phase one of the distillery build for Sliabh Liag. Built by local contractors and coppersmiths Forsyth’s of Rothes, they can produce a half million liters of whiskey a year in single malt and pot still styles at the new facility.

James Doherty, Sliabh Liag co-founder, said in a prepared statement, “Construction of the Ardara Distillery began in October 2020, and despite the many challenges that these past few years have thrown at us, from the pandemic to Brexit and everything in between, we managed to go from putting in the foundations to distilling in less than a year.” 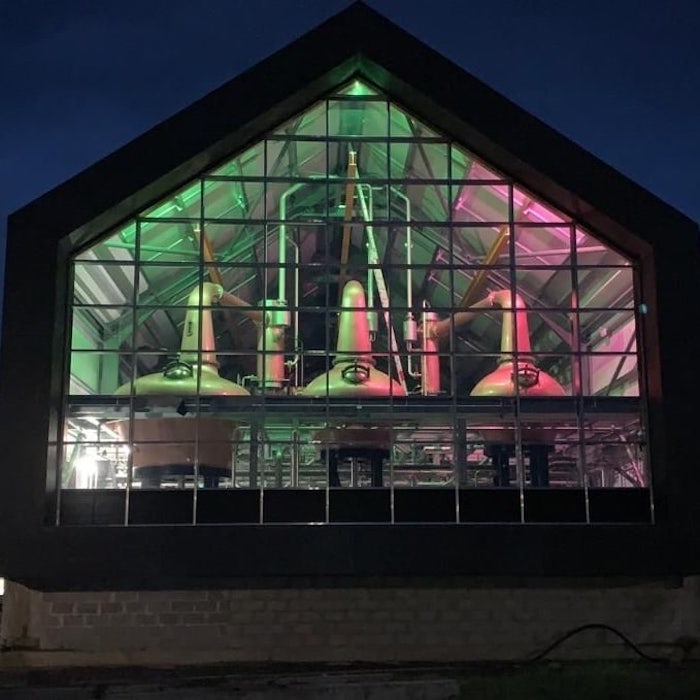 The stills at Ardara Distillery (image via Sliabh Liag Distillers)

He said that as a company, Sliabh Liag looks to make spirits that honor the deep traditions of whiskey making in this part of the world, which leads to their smoky whiskey made in an authentic Ulster style.

“The first spirit to have flowed from the stills is truly outstanding, I’m sure my grandfathers, who were both poitín men, would approve. I think the spirit will take wood well, but we must now let the magic in the casks happen and busy ourselves with patience to see what effect maturation has,” James added.

Moira Doherty, co-founder, said that sustainability played a huge factor in the design of the new distillery, with a focus on waste and energy reduction through initiatives like their “all grains in” approach that sends spent grains to be used as cattle feed.

The company’s operations in nearby Carrick will be the home for all their administration and for bottling, with 10 full time jobs based at that site.

Sliabh Liag Distillers will provide up to 40 full time jobs in the area when the Ardara Distillery is fully operational. The distillery’s interim visitor center looks to open for this coming summer season.

Work on phase two of the distillery is set to begin, with a dedicated gin still-house and increased visitor center capacity to come.

Graeme Bell, Sliabh Liag’s distiller manager, has plied his trade of whiskey-making in Speyside, Scotland as well as in Kentucky’s bourbon country. Most recently, he made whiskey in Hamilton, Canada.

“I feel fortunate to be in at the start for the Ardara Distillery, working in a beautifully designed new distillery with the finest copper stills from Forsyth’s in Scotland, which have been made specifically to reflect the distilling traditions of this area,” Bell said. “Our goal is to use locally grown barley and oats to make both single malt and pot still whiskeys and to bring back many traditional whiskey-making methods from the past.”

For more information on the new distillery, check out www.sliabhliagdistillers.com.