There’s something special about the age of 18 … in a young person’s life it’s a transition to adulthood. In the whiskey world, 18 years of age shows a level of maturity and commitment to patience and craft.

Located on the Wild Atlantic Way in Kinsale, Ireland, Blacks is Ireland’s first co-located brewery and distillery. In 2018, husband and wife duo of Sam and Maudeline Black launched Ireland’s first-ever spiced rum, Blacks Spiced Rum, made entirely from start to finish in Ireland. 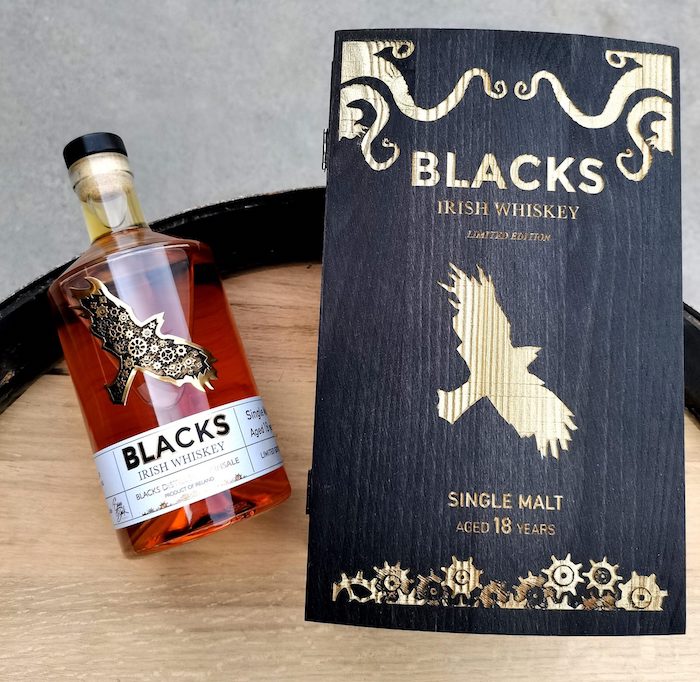 Blacks began the process of developing a single malt whiskey with a unique twist, by securing a limited amount of aged single malt that would complement the characteristics of their rum casks, which previously held their gold-medal winning liquid.

After continuous sampling and hours of profiling this spring, the new spirit had reached peak maturation. There are only 563 bottles of Blacks limited edition 18 Year Old Single Malt, each individually numbered.

And for those whiskey collectors who keep their bottles unopened for many years, Blacks is giving whiskey fans a free 20ml spirit sample with each bottle to sip and savor the new Irish spirit.

“The idea for this whiskey stemmed from our desire to push the boundaries for Irish spirits and continue to bring about new and innovative releases,” Founder Sam Black said in a prepared statement. “We are very familiar with this rum cask style here at Blacks, but it is something completely new to even the most renowned whiskey connoisseurs.”

The distiller’s official tasting notes show that on the nose, the 18 Year Old “opens with confected aromas of vanilla maple syrup, sticky toffee pudding and candied fruit. Slight hints of coffee beans are set aside by the oak wood undertones before being reminded of banoffee pie and tropical desserts.”

On the palate, the notes state that the drink is velvet soft, with a toffee rich mouthfeel giving way to notes of caramel coated nuts and butter baked biscuits. Sweet malt and rum spices follow as exotic fruit notes push to the forefront.

The whiskey finishes with lingering nutmeg spices and dried sultanas fading out before being left with the oak wood undertones that characterized this whiskey for the first 18 years of its life.

Retailing for €500 per bottle, the whiskey is available exclusively through the Blacks online store.