In the 1800s and early 1900s, whiskey bonders were the ones responsible for blending and bottling whiskey. They were pub owners and merchants and independent bottlers, those who sourced new-make spirits from distilleries which they then aged in their own casks, before blending and bottling for local customers.

In the 1930s, the Irish Whiskey industry collapsed and with that, Irish whiskey bonding went by the wayside.

After launching J.J. Corry Irish Whiskey, McGuane became the first modern whiskey bonder in Ireland in more than 50 years. The brand’s first offering in America, The Hanson, is a blend of Irish grain whiskeys sourced from different distilleries and it clocks in at 92 proof.

On the heels of this new release, Louise McGuane spoke with The Whiskey Wash about whiskey bonding and everything Irish whiskey. 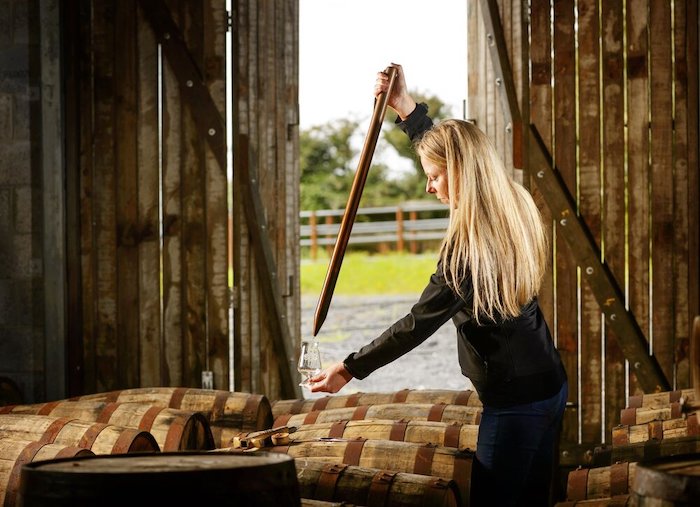 The Whiskey Wash (TWW): If you could sum up whiskey bonding in one paragraph, what would it be?

Louise McGuane: Irish Whiskey Bonding is the practice of sourcing new make spirits and mature Irish Whiskies from distilleries throughout Ireland to then mature, blend, and bottle the unique whiskeys. During the ‘golden age’ of Irish whiskey (in the 19th and 20th centuries), there were hundreds of distilleries operating on the island of Ireland, however, most did not have their own brands of whiskey at that time.

These distilleries made their new-make whiskey spirit and sold it wholesale to the bonders to then age, blend, and bottle. The bonders were the publicans, grocers, and mercantile owners. They would travel to their local distillery with their own barrels, fill them up with new make spirit and then cart them home for aging and then blending. Bonders were present in every town in Ireland, giving rise to regional styles. Sadly, the Irish whiskey industry collapsed in the 1930s and the few remaining distilleries cut off the bonders’ supply, leaving Irish whiskey bonding to die out.

TWW: Having control over your own barrels, is that a license for intensifying flavors as well as maturing the spirits?

McGuane: It is, it’s a vital part of being a whiskey bonder. We don’t have a distillery so it’s our responsibility to shepherd the new make from still to glass. We are responsible for enhancing the distillate character along the maturation journey of the spirit and then teasing out nuances in the blend. I take our cask program very, very seriously. We seek out cooperages, distilleries, wineries, and bodegas to work with dependent on the flavors imparted in those casks that we want to work with in our whiskies. We spend an inordinate amount of time working on and sourcing casks for just that.

TWW: How can the Irish whiskey industry benefit from whiskey bonding and how does your process set you apart from the way they did it back in the 1930s and beyond?

McGuane: The Irish whiskey industry can benefit from whiskey bonding because it allows bonders to create their own style and build a unique library of Irish whiskey flavors that can’t be replicated. As bonders, we are building that collection of flavors by sourcing Irish whiskeys from distilleries across the island of Ireland in hopes to make expressions that showcase the best of Irish whiskey, old and new. The main difference is that we can look far and wide for our casks and work with partners all over the world when brining in flavors. For example, with The Battalion, we worked with Mezcal and Tequila casks to impart agave green notes onto one of our grain vattings.

Although our process is similar to the way they did it back in the 1930s, we have created a Bonded Rackhouse that’s one of its kind in Ireland. It’s styled after a traditional Dunnage house but also takes inspiration from the maturation houses of Kentucky and France. It is southerly facing with windows to ensure that the temperature allows for continuous maturation. The floor is nothing but clay earth with a gravel screed, which helps to naturally maintain humidity levels within the rackhouse. It is small in scale, ensuring that the sleeping whiskey benefits from the wild fluctuations in barometric pressure and temperature we have in West Clare’s rugged landscape along the Wild Atlantic Way. 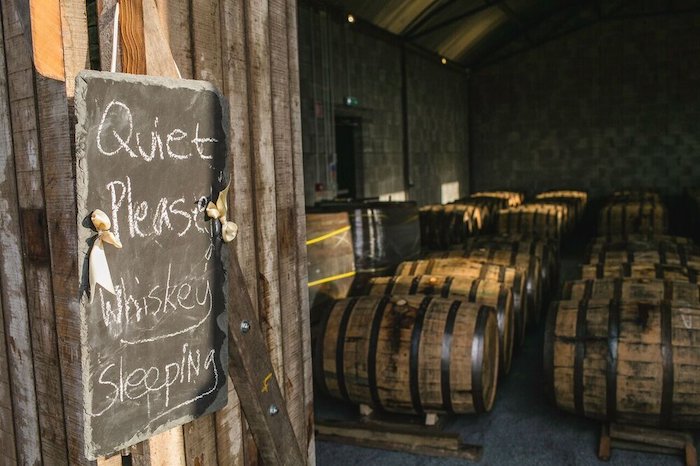 Some of the J.J. Corry whiskey at rest in the rackhouse (image via J.J. Corry)

TWW: Tell us about the name J.J. Corry as well as The Gael and The Hanson?

McGuane: When I set out to understand the methodologies of whiskey bonders of the 1800s, I didn’t have to look too far as only three miles away from my family farm was once a renowned whiskey bonder called J.J. Corry. J.J. was an innovator and a man before his time. His little shop at 63 Henry Street in Kilrush was a key part of the local community and the only place where you could buy J.J.’s pride whiskey, ‘Corry’s Special Malt.’ It was available by the glass for three pennies or by the jar.

J.J. was a true entrepreneur and innovator, born on the farm close to my brand’s home. A pillar of the community, J.J. was also a true renaissance man and an early adopter of technology. As the social secretary of the town cycling club, he even went as far as inventing his own bicycle, ‘The Gael,’ after which I named my first whiskey. Most of all, J.J. was known for his hospitality and of course, his whiskey.

The Hanson is named after J.J. Corry’s exciseman John Andrew ‘The Gauger’ Hanson. Back in their day, the exciseman, or ‘Gaugers’ as they were known, were tasked with keeping the bonders on the straight and narrow … men to be avoided where possible. But J.J. Corry knew better than that and befriended the young John Andrew and regularly invited him for a taoscán, which led to Gauger Hanson proposing to J.J. Corry’s daughter, Josie. The Hanson is J.J. Corry’s first release that aged on the McGuane family farm in Cooraclare and is a tip of the hat to the family bonds that go into J.J. Corry Irish Whiskey.

TWW: Where is the future of whiskey going and how will you be a part of industry-wide changes, if any?

McGuane: Whiskey is having a moment … the big evolution I think is the democratization of the category. For a long time, it was marketed as an exclusive ritual led consumption moment and, let’s face it, it was aimed at men for a long time. With the influx of independent producers not bound by traditional tropes and who take influence from the zeitgeist and what’s going on around them, we are seeing a lot more dynamic whiskey brands emerge.

They don’t shy away from mixing whiskey and encourage folks to experiment and have a more welcoming positioning. This is why we are seeing a lot more women now choosing whiskey. The image is fundamentally changing and the occasions for consumption are widening. My contribution is to make sure that at J.J. Corry, we respect tradition but embrace change. Irish whiskey in particular is on the rise. My goal is to ensure I shine a light on the variety and breadth of new makers that have joined the industry, and to ensure folks understand there is more to Irish whiskey than the well-known big brands.