Conor McGregor Nets Up To $600 Million In Sale Of Proper No. Twelve Irish Whiskey

Reaching a long-term agreement worth up to $600 million, the Proper No. Twelve Irish Whiskey founding team led by Conor McGregor will continue in collaboration with Proximo Spirits after it was announced this week McGregor had sold his majority share in the brand he helped found.

The new long-term deal is a windfall for brand co-founders McGregor, Audie Attar, and Ken Austin. That sum, according to Austin, includes the $250 million the team has already earned in the brand’s first two years in business with Proximo, which previously held a 49-percent stake.

Conor McGregor will remain a stakeholder of Proper No. Twelve, the brand that will make him a billionaire, and will remain actively engaged in promoting it. 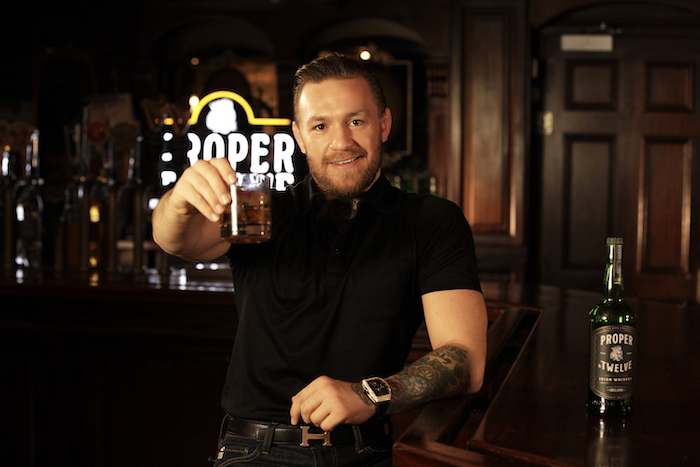 Conor McGregor, up to $600 million richer, will continue on with Proper No. Twelve (image via Proximo Spirits)

“I founded Proper No. Twelve less than three years ago and today it has become a shining star in the spirits industry,” McGregor said in a prepared statement. “This agreement is exciting for my partners and me, and the potential is limitless. Our vision is for Proper No. Twelve to continue its incredible growth worldwide and to keep bringing new consumers to the now-reinvigorated Irish whiskey market.”

The brand spans the globe, and Proper No. Twelve’s Instagram handle, @properwhiskey, has amassed nearly a million followers and is said to be one one of the most-followed social media accounts in the spirits industry.

Mike Keyes, president & CEO of Proximo, said, “When we launched, the Irish whiskey market was dominated by one brand. Now, Proper No. Twelve has disrupted the category and has become a leading brand within the industry. We are thrilled with what we and our partners have achieved in growing Proper No. Twelve to this point, and we look forward to continued success together. This agreement also demonstrates Proximo’s commitment to expand its presence in the fastest-growing segments of the spirits industry.”

Ken Austin, co-chairman of Proper No. Twelve, added, “We launched Proper No. Twelve just a few years ago and our efforts have been magical. I am proud of our team and even more proud that we have been able to use this business as a platform to give back by donating millions of dollars to first responders around the world.”

The brand has shipped more than 500,000 nine-liter cases (about 6 million bottles) in eight international markets in the first two and a half years of business, with additional territories on the horizon.

“Conor and I started to dream about building our own brands and companies from the beginning of our journey together, which was roughly a decade ago. We brought that dream to reality,” said Audie Attar, CEO of Paradigm Sports, and co-founder of the brand. “We could not be prouder of our team and the success we’ve all built together. We are excited for the next phase of this incredible brand … making Proper No. Twelve the leading Irish whiskey in the world.”

“It is rare to see a celebrity impact a brand the way Conor McGregor has Proper No. Twelve Irish Whiskey, and I have not seen many brands in the spirits industry catapult to this level of success in such a short period of time,” Keyes said. “This agreement is a vote of confidence in the incredible potential of this brand and a testament to the incredible work of Conor, Audie, Ken and the Proper No. Twelve team, as well as the efforts of Proximo and its distributors, who made all this success possible.”

McGregor has said that several Irish whiskey makers sought his endorsement over the years. He said he was inspired by his pride for Ireland and his love of Irish whiskey, and an entrepreneurial and philanthropic spirit drove him to create his own whiskey that would match his high standards and make his country and the world proud.

McGregor, his manager and business partner Attar, and spirits industry entrepreneur Austin developed the whiskey under the project name “Notorious,” which eventually became Proper No. Twelve.

“We took the time to develop an incredible whiskey, made at the oldest and most respected whiskey distillery in the world, and the world has responded with unprecedented demand,” McGregor said.