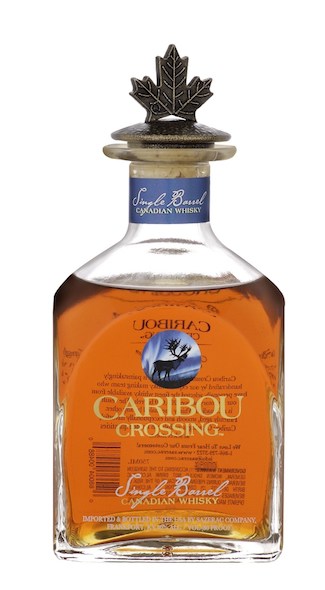 While an impressive feat, it does beg the question, what does it mean for a Canadian whisky to be single barrel? In her article “Canadian Whisky is Way Better Than You Think”, Kara Newman notes that “the small-batch/single-barrel phenomenon that has entranced U.S. whiskey drinkers over the past decade has largely bypassed the Canadian market.” This is exacerbated by the specifics of how Canadian whisky is produced. Canadian whiskies are distilled and aged separately based on the individual grain alcohol before being blended to taste and proof and then bottled.

Caribou Crossing is said to be made from “the finest sampling of their collection of 200,000 barrels of whisky.” Years ago under Drew Mayville, Sazerac purchased these whisky barrels from a now-defunct Canadian whisky distiller. Mayville oversees the blending of Sazerac’s 23 different Canadian whisky offerings including, Legacy Small Batch Canadian Whisky and Royal Canadian.

The bottle is an unique as the whisky itself. The bottle has a squat squarish shape reminiscent of a whisky decanter, and is capped with a pewter caribou and has a blue wax seal. There is an etched image of a Canadian wilderness at night on the back. Like other Canadian whiskies, it comes in at a lower alcohol content (80 proof), which makes for a smoother drinking experience.

Nose: The nose is very faint- almost imperceptible. The smell is a mix of cinnamon and fresh-baked cookies with a hint of a fruit cobbler.

Palate: The flavor smooth and velvety. Light spice peeks through an otherwise straightforward flavor replete with oak and slightly floral undertones. The finish is long in contrast to a relatively light mouthfeel.

This is a high quality whisky that’s good for people who already appreciate the craftsmanship seen in more recent Canadian whiskies. That said, because of it’s mild yet complex flavor, it also makes a good (albeit expensive) introduction to Canadian whisky in general. Because it’s a single barrel whisky, each bottle offers a unique drinking experience, and once your whisky is gone you may never get something that tastes the exact same ever again. It’s this exclusivity that’s makes Caribou Crossing so intriguing for Canadian whisky fans.