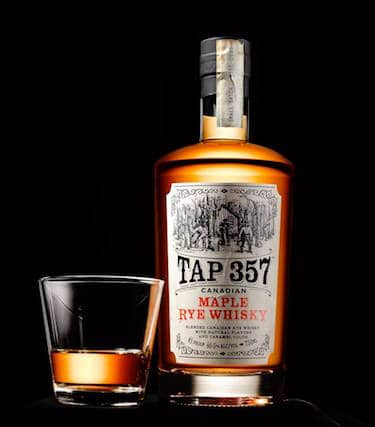 Editor’s Note: This review sample was pulled from the personal collection of The Whiskey Wash’s founder.

The Whiskey Wash is based out of Portland, Oregon. Brunch is our fine city’s religion. Portlanders ardently debate best dishes, and waiting in line is something worked into the weekend schedule—or lack thereof.

And yet: There are cheap assholes (like me). Brunch haters. We’d rather scramble our own eggs, nuke our own oatmeal and liberally glug vodka into spicy V8 in the privacy of our own cat-hair-strewn kitchens.

I thought of this when I took my first whiff of the Tap 357 Canadian Maple Rye.

But first—a bit about the whiskey.

Tap Canadian Maple Rye is produced at the oldest distillery in Western Canada. It is a blend of whiskies aged three, five and seven years (hence the name). It’s distilled four times, and aged in new, second- and third-use bourbon barrels. It is then blended with caramel coloring and pure Canada 1/Grade A Light maple syrup from Quebec. Tap 357 won Flavored Whiskey of the Year at the 2014 Canadian Whiskey Awards. It is 81 proof.

Looking at this bottling the flavoring stuck out to me as a potential red flag. Rye + Maple? It sounded like a dare. It reminded me of what you drink when you first start drinking, when you want alcohol’s effects, without its taste. Would Tap be the wine cooler of the whiskey world?

Even with its artificial caramel color, Tap 357 is very light. It’s the color of a very watered down Coke. Like the color of the soda when you don’t want to splurge on another refill, so you start mashing the ice down with your straw to make it last longer.

The nose is…maple syrup. It smells like old breakfast dishes. It smells like someone had pancakes and waffles, drenched them with syrup, ate half of them and no one’s come around to clear the table, even though it’s been half an hour while would-be brunchers stomp their heels outside in the rain. It smells like sad lonely brunch frustration.

It tastes…just like it smells. I feel it in my teeth. I feel it wearing away my teeth. This is something dentists should collect on Halloween and pay you back for.

A full minute after sipping, I could still taste maple. Only maple.

When I forced this on charitable and patient co-tasters, they offered more tactful responses, comparing it to dessert wine or calling it “Maybe ok in a cocktail with lemonade,” to which I replied, “So, it’s like the Master Cleanse went to the bar?”

When did it not be okay to have whiskey taste like whiskey?

Out of the kindness of my co-tasters’ hearts (or inferior palates), I am giving Tap 357 two scores: a 62 (for drinking on its own) and a 75 (for mixing into something else, like the holiday punch of someone you abhor).