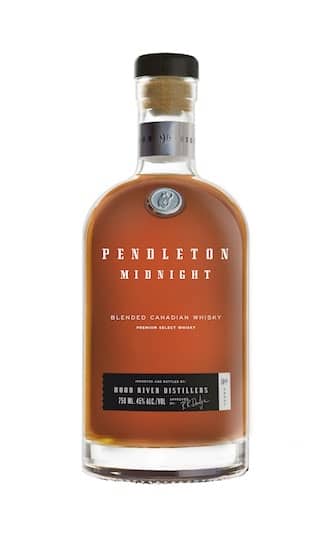 The king of blended Canadian whisky has had a long reign.  Since 1939, Crown Royal has held court in its lush velvet bag, comfortable in its superiority.  Deliciously smooth, the amalgam of 50 – count them, 50 – whiskies was content to be the standard to which other blended whiskies could only aspire.  Leave it to an American to challenge a king.

Hood River Distillers in Oregon has been distilling since 1934.  Entering the whisky market in 2004 with their first blended Canadian whisky, Pendleton, Hood River Distillers expanded its offerings in 2015 with Pendleton Midnight, a “premium select”  version of its successful predecessor.

Released in July of this year, Pendleton Midnight is a fusion of Canadian spirit and American spin. The whisky is aged in Canada for three to six years, and a portion of the north-of-the-border whisky blend is also matured in American Brandy barrels, which should provide a complexity often missing in blended spirits.  Glacier-fed spring water is used to bring it to proof (45 abv) adding a hint of terroir.

Despite its premium designation, the Pendleton Midnight is available at the decidedly proletariat price of around $35 – a good opportunity to see if the little American company has what it takes to be a player in the international scene.

Appearance: The color is a lively apricot, bordering on old gold, with medium legs.

Nose: The nose is surprisingly floral, with jasmine and orange flower blending nicely with sultanas and a hint of sapwood.

Palate: The whisky is smooth – a hallmark of its genre. Intensely sweet and buttery, the brandy barrel finish is evident in the peach and cardamom notes, deepening to English toffee and a vivid swell of Vin Santo

Finish: The finish is underwhelming and a trifle short, with coconut sap, dried fruit, tropical mango and agave at the fade.

Like most Canadian blended whiskies, the Pendleton Midnight is perfectly smooth – not a trace of alcohol or burn anywhere throughout the tasting.  While this broadens the appeal of the spirit to include non-whisk(e)y drinkers, for the rest of us this often results in a boring dram.

Although not without a few flaws (short finish, sweet imbalance), the Pendleton Midnight is not boring. The brandy cask finish is an innovation that just might make its way into a velvet bag somewhere – even if only as the perfect +1 to take on the Holiday rounds.

Score 84/100 (SHOP FOR A BOTTLE OF PENDLETON MIDNIGHT)