James Bay Distillers, the craft distillery with facilities in both Everett, Washington and Chilliwack, British Columbia, recently announced the release of a barrel-finished release of their beloved Galloping Goose Canadian Whisky.

This new expression was created by further aging their well-known Galloping Goose whisky (said to be made to a bourbon recipe and then aged 3 years in charred oak barrels) for an additional year in oak barrels that once housed bourbon and cognac. The 88-proof, 44% ABV whisky, according to James Bay, features “a complex flavor profile comprising caramel, vanilla, baked stone fruit, sweet chocolate, raisins and baking spices” and a “nice honey finish.” 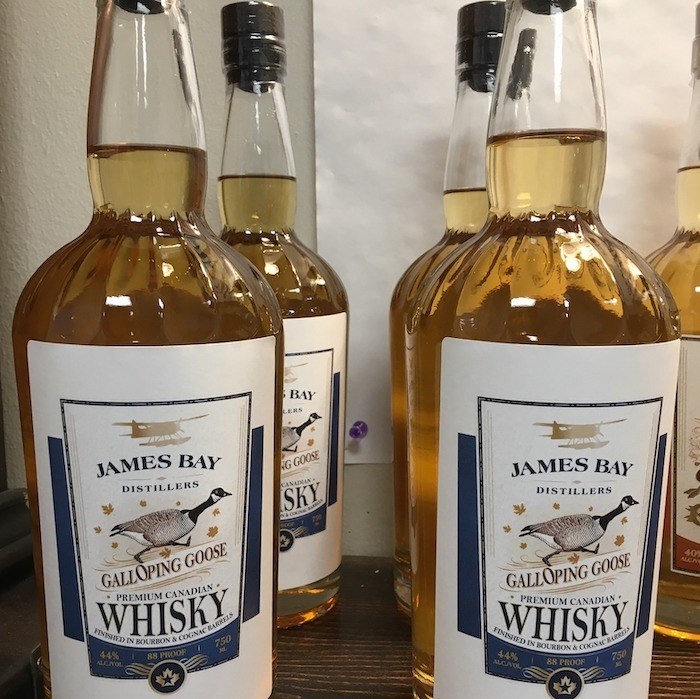 And to differentiate it from their familiar Galloping Goose whisky, the distillers are nicknaming this new release “Blue Goose” to go along with the blue labels on each bottle. The name, by the way, is “inspired by a former rail line and current bike path on Vancouver Island, BC.”

Currently, this new whisky release is available for purchase directly from the distillery’s home base at Everett’s Paine Field, the small international airport that serves Snohomish County, or, if you live in Washington State, Nevada, North Dakota, Alaska, and the District of Columbia, you can order the spirit for shipping via UPS. Their spirits are also available for shipping in Nebraska, Illinois and New Hampshire through SpiritHub, and directly at Virginia ABC Stores. The distillers are also planning to soon export their wares to European and Asian markets.

James Bay recently scored its fifth Gold Medal for their original Galloping Goose release at this year’s PR%F Awards, and earned Gold for their Cadboro Chocolate Flavored Whiskey at the same event. They are also offering whisky fans a chance to own part of their distillery through a recently announced WeFunder campaign, which hopes to net the company just over $50,000 to help them meet the global demand for their spirits.