Forty Creek Whisky, based in Toronto, Canada, announced last month the exclusive releases of their new Three Grain and Resolve whiskies. Both are said to be limited offerings, launched to celebrate the distillery’s 20th anniversary of their debut whisky and their 14th anniversary  of a yearly bottling, respectively.

Three Grain, according to David Allard, Vice President of Marketing at Campari Group, in a prepared statement, “has been a fan favourite since its first launch. We were constantly fielding questions about its availability, so we’re fortunate to share this release with our fans – especially since it’s our final batch.” 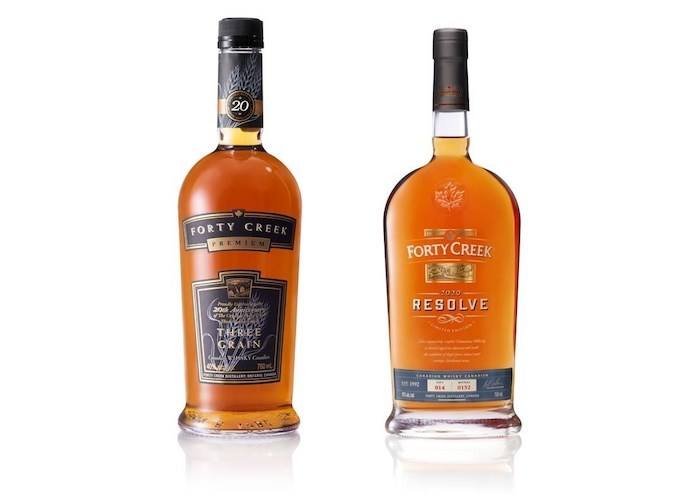 Official tasting notes for Three Grain make mention of “starting off sweet then drying quickly, the medium weight spirit boasts grassy and forward notes along with a masterful marriage of green and white pepper, almonds, and nutmeg.” It is said as well that “with only 9,200 bottles produced – representing the first year of whisky stocks in 1992 – this full flavoured, grainy, and nutty bouquet will bring aficionados back to their first glass of Three Grain.”

Forty Creek Resolve, meanwhile, is the finale of a trilogy of releases of specialty wood treatment whiskies from the brand’s Master Blender Bill Ashburn. This whisky is noted as having a foundation of barrel-aged corn, barley and rye whiskies., being further aged with a strongly spiced stave.

“Experimenting with wood aging has expanded our capabilities and allowed us to share a unique whisky trilogy, each with its own extraordinary taste palate,” said Ashburn, who recently won the title of “Canada Master Blender of the Year” from the New York International Spirits Competition.

Official tasting notes for Resolve indicate it “starts with a whisper of butterscotch and ends with an interwoven flavour mix, reminiscent of a long-matured Christmas cake. With cereal and a pulling bitterness that balances the barley sugar sweetness of candied fruit, the medium-bodied, long peppery finish whisky pairs well with fine cheeses and chocolate.

“The elevated spice profile is rounded out with a drop of vintage Villard Noir Port that closes out the wood treated, port finished whisky trilogy.”

While Three Grain is exclusively available in Ontario at a cost of about $60 CAD (around $45 USD), Forty Creek Resolve can be purchased in British Columbia, Ontario, Alberta, Manitoba and New Brunswick, for around $80 CAD (about $60 USD).