Column: Canada’s Oldest Distilling Scene Is Anything But Boring

Ontario is home to a lot of things. The nation’s capital; the country’s economic engine. Toronto, a sprawling, diverse city beloved by Drake, Gordon Lightfoot, and a host of other Northern-bred celebrities.

On the topic of celebrity, it’s safe to say Ontario’s whisky scene is certainly full of them.

In the Southern part of the province, Dr. Don Livermore oversees a portfolio of drams that range from JP Wiser’s to Lot 40 to Pike Creek to Gooderham & Worts. While most of these are historic brands, I love how cheeky Livermore is—I’m a big fan of his dark ryes at Lot 40 and his playful use of heritage grains at Gooderham.

Outside of that stable of brands, mainstay Canadian Club calls Ontario home too, as does Wiser’s and Forty Creek. 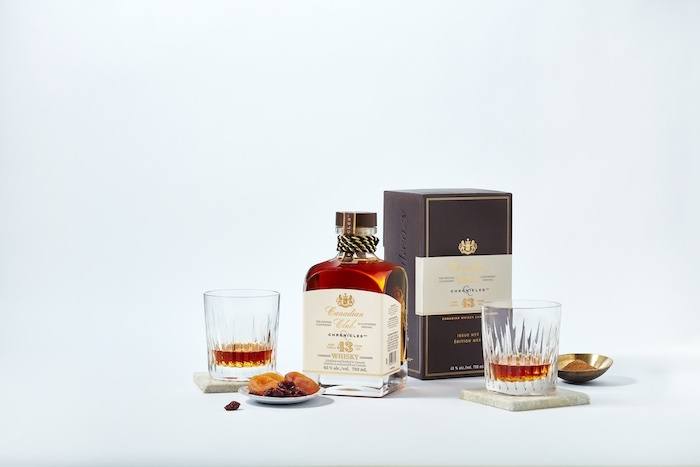 There are natural draws to Ontario. “Our warmer temperatures allow the whisky to mature in oak casks consistently, year-round, specifically in Southwestern Ontario,” says Tish Harcus, brand ambassador for Canadian Club. And the brand is taking care to play with those aging conditions. Canadian Club released a 43-year-old age statement last fall; toasted, with nutmeg spice and a sweet oak finesse that will make you recategorize the back bar staple. “Also, this region is also part of the corn belt and we have an abundance of premium grade grains to make our whisky.”

While over the last few weeks we’ve looked at high-rye options and bottles made with indigenous grain, Ontario focuses on the opposite. “When speaking about Canadian whisky there is usually a higher amount of rye and rye malts, which makes a beautiful spicy palate,” Harcus continues. “Ontario whiskies are usually a blended style which makes them very pleasing to consumers—lighter than a Scotch and not as sweet as a Bourbon.”

With so many major players dominating the province, how do small producers compete? Well, for the most part, they’re choosing not to. They’re lawless, using the category’s flexibility to do whatever they damn please.

Kinsip out in Prince Edward County (where my parents call home these days) is making requisite rye (albeit aged in red wine barrels sourced from the tiny wine region’s other producers), but I’m far more interested in their other brown spirits. A maple whisky—some sort of liquid Canadian stereotype I hate to admit I love —plus a lovely brandy with those alluring notes of dates and an aged rum, with all the cigar-esque, earthy notes I want from a complex sipping brown spirit. Whisky who?

North of 7 Distillery uses oddball local grains, including heritage purple corn, wheat, rye, and barley, from Moulin St.-Georges Mill (corn from the Alexandria area) and Against the Grain Farm in Winchester.

Spirit of York is producing 100% rye (in gorgeous glass bottles) that source all yeast and water from a small town in Ontario. They also make a mean aquavit.

Ontario has a long history of turning out great whisky. It started as a byproduct of the farming industry.

In 1794, John Graves Simcoe, Upper Canada’s lieutenant governor, reported to the government that residents and farmers had started distilling excess grain into spirits. The home distilling scene spread like wildfire—by 1801, there were 51 stills across the population of 15,000.

James Worts and William Gooderham set up shop in Toronto in 1831. Initially it was a milling company, processing Ontario grains to be shipped out of the Toronto port. In 1837, they expanded their business, adding brewing and distilling to their portfolio. Within twenty years, the distillery was the largest producer of whisky in the world—so powerful it commanded the establishment of railways and city infrastructure. Barley wasn’t common, so blends were made with barley, corn, wheat, and rye.

In 1858, New England-born Hiram Walker set up a distillery down in Detroit. He began selling a very unique whiskey, aged in barrels (Which was unheard of at the time). When the threat of prohibition looming, Walker uprooted his distillery and set up shop across the river in Walkerville, Ontario. Here, Canadian Club was born. The spirit took off like wildfire, taking hold of drinkers across Canada and the US (so much so that American distillers across the river hated his success and pushed a law through that required foreign whisky to state their country of origin to discourage Canadian whisky consumption).

That entrepreneurial mentality is still alive and well today in Ontario. There are dozens of tiny distilleries making exciting bottles. Kavi is making silky espresso-inspired whisky, elegant for sipping with just that kiss of coffee (it’s also run by the lovely Jackie DeMarco, the daughter of a distilling vet). Beatties is making Poitin; Irish whiskey-influenced moonshine aged in oak; warming, hair-on-your-chest stuff. I’m patiently waiting for Willibald to release their first whisky, but till then, their genever-style gins will fill my bar cart.

15
Shares
8.6k
Views
Share on FacebookShare on TwitterGet Our Newsletter
Read More Whiskey News
Column: Exploring British Columbia’s Craft Canadian Whisky Bubble
Cheers to the Dads! Personalize a bottle of his favorite whiskey to create a modern gift for the modern man. Use code: FATHERSDAY20 for $20 off your next order of $100 or more at ReserveBar