Young Coppersea Excelsior Bourbon Is As Old School As It Gets 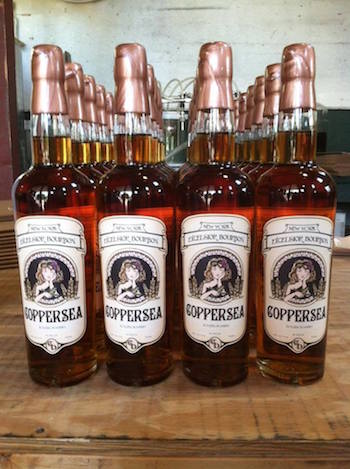 The story of Coppersea Distilling out of New York State is a fascinating one, to be sure. These guys are one of the most old school of the new breed of craft whiskey makers, right down to being just one of a handful of distilleries in the US to have their own malting floor. Many consider them a heritage distillery, if you will, which is what makes it all the more interesting to tell you about a new bourbon they’ve just announced that is ready for purchase.

Known as Excelsior Bourbon, this is a young whiskey that’s said to be 100 percent New York. What does that mean exactly? According to a recent email update from the distillery, the bourbon “comes from all-NY grain distilled in NY and aged in barrels made in New York of Hudson Valley oak. We worked with US Barrel to help them in the transition from ‘slack’ barrel making to ‘tight,’ and they’ve become the first cooperage in the northeast US in generations.”

What I find particularly fascinating about this is the use of New York oak barrels to age this bourbon. A news release put out by Coppersea this past August suggested that month was the time frame in which it had “filled the first whisky barrels made from New York State-grown white oak and built by a New York cooperage, U.S. Barrel Company, since Prohibition.” The whiskey put into said barrels was one each bourbon and rye, again suggesting that if Excelsior is the bourbon laid down at that point we are looking at something that is a year or less in age.

Coppersea did state as well today in its Facebook announcement of this release that “our first few rounds of Excelsior Bourbon will be one year old in 15 gallon barrels. We’ve been working on this project for several years, developing our understanding of oak and coopering and working with our cooper as he has built out his production capability. Going forward we will be moving up to larger barrel sizes and longer maturation periods.”

Regardless of the young age of the bourbon, It definitely seems like a very cool thing Coppersea has going on onsite. In keeping with the heritage motif, the distillery also makes use of open wooden fermenters, direct-fired copper-pot stills and sour-mashing (they even own their own farm for grain growing). They’ve drawn attention to themselves in part as well for their fascinating use of green malt in some of their whiskey bottlings. As they describe it, “unlike traditional malt whisky, we mash the germinating grain without drying or kilning, creating a whisky with notes of hay and fresh meadow.” You can watch a video below to learn about their green malt process.

As for this bourbon, Coppersea said this initial release is very limited in size so retail allocations will be small. I would suggest you make sure to follow them on Facebook if you want to find a bottle.