Oak & Eden In-Bottle Whiskey recently teamed up with American cowboy and actor Forrie J Smith for one of the first bourbons in its latest product line, the Anthro Series.

The series stands as a revolving line of unique whiskeys crafted in collaboration with some of America’s most notable personalities, from actors to musicians to professional athletes. Smith, known for his role as Lloyd Pierce from Paramount Network’s hit TV show, Yellowstone, collaborated with the brand to produce a 116 proof bourbon whiskey finished with a cold brew coffee-soaked American Oak spiral.

Oak & Eden’s process, called In-Bottle Finishing by them, involves a spiral-cut piece of oak (called a spire) placed into every bottle of fully aged whiskey, introducing new flavor profiles and characteristics that didn’t exist in the original aging barrel. The distillery then has the opportunity to infuse the spire with another beverage, such as wine, coffee, beer, liqueur, etc., giving the ability to customize each bottle of whiskey at a much greater level. 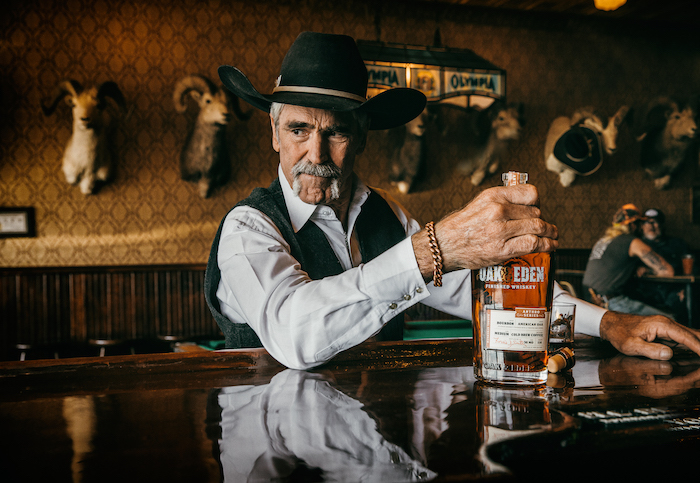 Whomever the distillery chooses to partner with then has the ability to customize their product by selecting the base whiskey (bourbon, rye, wheated bourbon, or four-grain bourbon), the alcohol proof (90 proof or 116 proof), the spire wood species (American Oak, French Oak, maple wood, cherry wood), and then an infusion.

“The Anthro Series is the pinnacle of the Oak & Eden brand,” Cofounder & CMO of Oak & Eden Brad Neathery said in a prepared statement. “We are giving the power to the people, allowing them to create their own one-of-a-kind whiskey on their terms, not ours. This is only the beginning of a much larger initiative, and we couldn’t be more honored to partner with Forrie and Kina to kick off the Anthro Series.”

Oak & Eden has secured additional personalities to collaborate with for future releases inside the series, but has not yet disclosed the names. The Anthro Series lineup will be exclusively distributed direct-to-consumer and is currently available to purchase online in 32 states through the distillery’s website, with Forrie J Smith’s bourbon being available for a retail price of $84.