With the increase in demand for bourbon surging, Woodford Reserve is looking to meet that demand by expanding its Versailles, Kentucky distillery, doubling its production capacity and adding three new copper pot stills. The Brown-Forman Corporation, Woodford Reserve’s parent company, recently announced the planned expansion of the distillery as it celebrates the label’s 25th anniversary.

“The expansion of the distillery allows us to look to the next 25 years,” said Woodford Master Distiller Chris Morris in a prepared statement. “We use copper pot stills in a triple distillation process to handcraft bourbon, and today’s announcement builds on that legacy.”

Brown-Forman President and CEO Lawson Whiting said the Woodford Reserve brand is a “key driver of growth for the company. And the investment ensures the brand continues to expand around the world. Woodford Reserve has enjoyed exceptional growth over the last decade, maintaining a double-digit net sales growth rate year-to-date with more than one million case sales.” 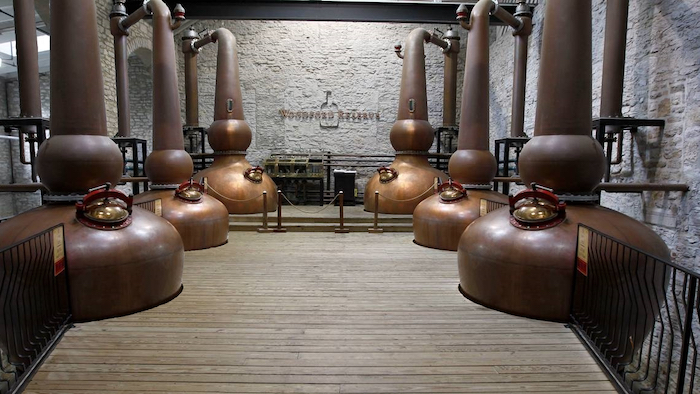 The whiskey making stills at Woodford Reserve (image via Brown-Forman)

Along with the copper pot stills, the distillery expansion includes a new building that will house the boiler plant, additional fermentation tanks, a grain unloading area, a barrel unloading and storage area, and a conference and training center for employees.

Construction will begin this spring and is expected to be completed by summer of 2022. The distillery’s site, located at McCracken Pike in Woodford County, will be fully operational throughout this period.

Brown-Forman opened the Woodford Reserve Distillery and introduced Woodford Reserve Kentucky Bourbon in 1996. The distillery is actually a national historic landmark where distilling first began in 1812. Which is why the expansion plans were reviewed by the Kentucky Heritage Council, the state’s historic preservation office.