The powers that be at Woodford Reserve in Kentucky deemed not too long ago they needed a new way to greet the ever increasing number of tourists making the trek from places like Louisville to their picturesque distillery set amongst thoroughbred farms in the rolling hills of Central Kentucky. With over 150,000 visitors coming just last year alone, this certainly makes sense, and thus a new distillery welcome center has been opened.

What is now known as the new Woodford Reserve Welcome Center is described as being “a modern take on a traditional Bluegrass farmhouse set amid the rolling hills of Central Kentucky.” It is here where visitors will begin their tour, boarding a bus to go across the street and experience the acts of fermentation, distillation, maturation and bottling before heading to the Visitor’s Center for a tasting (this is a separate building that will continue to house the gift shop, Glenn’s Creek Cafe, under the direction of Chef-in-Residence Ouita Michel, and a cocktail bar.) 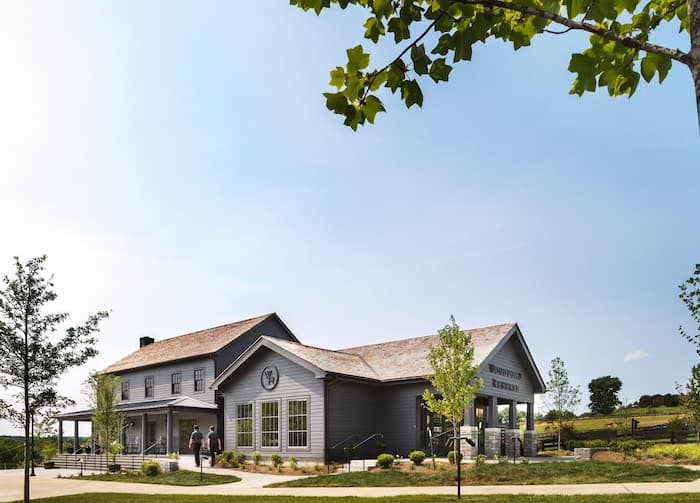 Key features of the new welcome center include a main hall with seating, a ticketing area, restrooms, a bar, and outdoor entertaining spaces. Materials include oak and limestone as a nod “to the importance of both in the bourbon-making process.” It is noted by Woodford as well that the artwork in the main hall are all originals by mostly Kentucky artists depicting the Kentucky landscape.

The Woodford Reserve property as a whole, which opened in 1996 in its current incarnation, sits on land where distilling began in 1812. It is designated as a National Historic Landmark and is located in the town of Versailles, Kentucky.