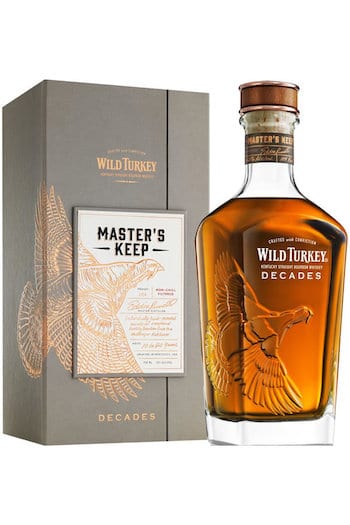 Wild Turkey made something of a splash for itself in the older bourbons market space back in 2015 when it released the original Master’s Keep, a 17-year-old bourbon that was among the oldest the distillery had ever unveiled. It is going back now to some of that older stock with the debut of Master’s Keep Decades, a blend of whiskies stretching back up to two decades old.

Wild Turkey Master’s Keep Decades, according to the distillery, is a blend of bourbons aged 10 to 20 years and bottled at 104 proof. It continues a trend we’ve seen in more recent times with Wild Turkey moving somewhat beyond its 101 offering into higher end bottlings. To this end Decades is appropriately priced as well, dropping at around $150 a bottle.

Decades is something of a celebration for Wild Turkey master distiller Eddie Russell, who is celebrating his 35th anniversary this year in the whiskey industry. As the story goes Russell put on his work boots for the first time back in June, 1981 to begin the long process of taking up the distilling mantle from his legendary master distiller father Jimmy Russell. The two continue to work side by side to this day as the industry’s only active father and son master distiller duo, boasting almost 100 years of combined experience.

“For Master’s Keep Decades, I went all out and used some of the rarest and most precious barrels in our stocks,” said Eddie Russell in a prepared statement. “The final product is a whiskey with the finesse and deep character of older Bourbon, anchored by the bold, balanced, and vibrant backbone of younger bourbon. I have to say, this is a whiskey I truly love and I’ll be holding a few bottles back for my personal collection.”

“When Eddie started working at the distillery, I didn’t make it easy for him. I didn’t want people to think I was giving him special treatment, so I made him do a lot of hard, thankless work to earn everyone’s respect,” added Jimmy Russell. “Watching him step into his own, earn the admiration of his peers and create some of the best whiskies I’ve ever tasted has been the most fulfilling experience a father could ask for.”