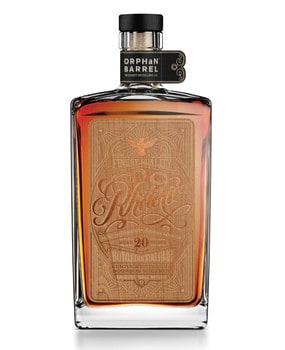 Editor’s Note: This whiskey was provided to us as a free sample to review by the party behind it. The Whiskey Wash, while appreciative of this, did keep full independent editorial control over this article. Also, it should be noted the 21 year old variant of this bourbon recently started appearing at retail.

I recently received a sample bourbon bottle in a wonderful package that looks like a book.  Rhetoric is a story I could read over and over again.

The Orphan Barrel Whiskey Distilling Company brand is owned by spirits giant Diageo and, as the marketing behind it goes, it is dedicated to finding “orphaned barrels” that were forgotten and then releasing them in a small batch whiskey concept.  Orphan Barrel has released a number of offerings under this umbrella already, including Forged Oak (15 year old), Lost Prophet (22 year old), Barterhouse (20 year old) and the quite old Old Blowhard (26 year old).

While most of these are one off expressions the one I’m covering, Rhetoric, takes a slightly different twist.  This is being released as a vertical over the next few years, starting at the 20 year old mark and then followed in succession by a 21 and so forth until they release the last batch as a 25 year old bourbon.

That is right, six releases of a bourbon that is aged one year apart, 20 to 25 years.  This will be an exciting expedition in bourbon maturation.

This is a very nice and enjoyable 20 year old bourbon that most will greatly appreciate the smooth drinkability of. Suggested retail is $85 per 750ml bottle of 90 proof, though right now online retailers seem to be averaging the price of this release over $120.  This is a limited production offering, and the vertical aspect will only highlight the shining star that is this bourbon.

I am by no means an expert of whiskey, but I feel I am well versed and definitely well exposed to drinking. I am specializing in bourbon and rye as my taste buds have pulled me that way. I have read a large amount on the subject and exposing myself...