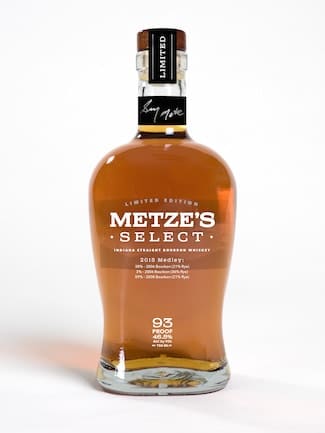 When MGP announced the limited release of Metze’s Select Bourbon earlier this year, there was a general hullabaloo with equal parts speculation and cynicism.  A true whiskeyphile, however, is always willing to believe in the next best dram, and there have been some good third party whiskies produced from MGP stock before.

While waiting for the waves of conjecture to quiet down, I took a deeper look into Metze’s Select.  MGP’s Master Distiller Greg Metze combined three aged straight bourbons, which the company carefully called out in promotional materials as all being distilled by them. What you have here is essentially a high rye bourbon mix with the following component breakdown:

The resulting whiskey was then bottled at a reasonable 93 proof.

Because this is only the second public release of MGP for retail that we are aware of, one wonders if all the distilleries that rely on this big supplier for their juice might be cringing a bit at the competitive edge Metze’s Select will represent.  Although the public has no vested interest in the success or failure of MGP’s foray into retail, the viability of the business model does rely on what’s in the bottle.  At nearly $75 a pop, this bourbon will have to prove it’s worth the price tag.

In the glass: The color is bright, almost true amber, sporting medium legs, and a nose heavy with raw cocoa, vanilla, macadamia and nutmeg.

On the Palate: The age of the bourbon has drawn the sharpness out of the rye, leaving behind a silky blend of wood and spice, buttered toffee, apricot and cloves.

The Finish: Regrettably short, the finish is shot through with impressions of Lyle’s Golden Syrup and caramelized banana.

Pairings: Definitely on the sweeter side, with a luxurious mouth feel, this bourbon would pair well with echoing flavors: chocolate sourdough bread pudding, vanilla poached pears with creme anglaise, or – if you’re lucky – the last of the summer peaches.

With Metze’s Select, MGP has shown it can do more than just distill base spirit for others to finish.  The mash bill is daring.  The final product benefited from the risk, though, as the high rye content added depth without overpowering the bourbon character of the whiskey.  Just a tad more to balance the sweetness, and Metze’s would have scored a tic higher.

I give Metze’s Selection bourbon a rating of 87 Points. You can look to track down a bottle for sale through an online liquor retailer here.