Litchfield Distillery opened its doors in 2014 in Litchfield, Connecticut, a town of around 1,200. Brothers David, Peter, and Jack Baker originally started out in the water bottling business at their third-generation family-owned company Crystal Rock, which has been in their family since 1914. The brothers, with their existing knowledge of the beverage industry and love for whiskey, decided to try their hand at producing craft spirits.

In addition to bourbon, they also produce gin, flavored and unflavored vodka, and they’ve even experimented with a coffee bourbon. In an interview with local news, they estimated they bottled a couple thousand bottles of whiskey in the last year. 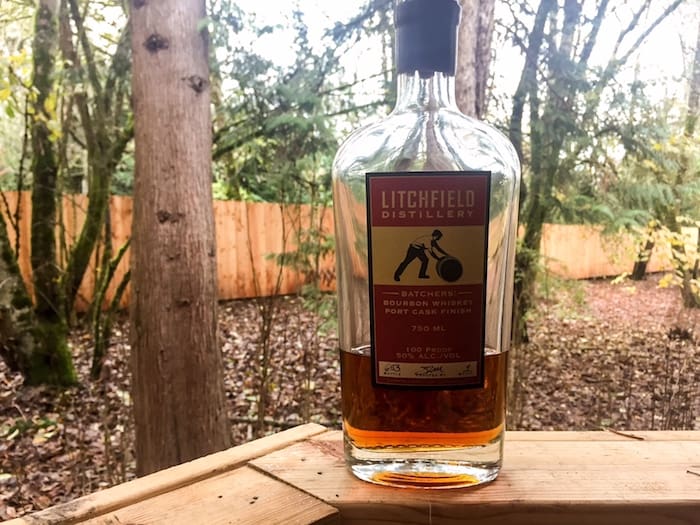 The distillery was able to offer a robust line of products almost immediately due to a single purchase of 250 barrels of six-year-old bourbon, according to a New York Times article. They finished batching the bourbon on-site, and bottled it as Batchers Double Barreled Bourbon Whiskey. David said he believes on-site production will catch up and take over for the Double Barreled Bourbon within four years, and whiskey distilled solely on-site is already available as Batchers Bourbon Whiskey.

Vital Stats: 100 proof, 50% abv, with a mash bill of unspecified amounts of corn, rye and barley. Aged eight-year bourbon is allowed to age for an additional six months in port barrels. Priced around $100.

Appearance: The bourbon is a beautiful golden brown, with the longest, stickiest legs. I set my glass down and over a minute later, heavy drops of whiskey were still rolling down the side.

Nose: The smell of butterscotch stands out, with lots of caramel and vanilla following up to create a very sweet scent. It reminded me of a happy memory with my grandma making peanut brittle.

Palate: This whiskey reminds me of Christmas. Initially, I could definitely taste the vanilla, caramel and butterscotch, and the port follows nicely adding some additional candied fruit flavors. The overall theme was very warm and sweet, with a bit of dryness toward the end due to the port aging, but that took a while to set in.

It’s a nice way to warm your bones during chilly weather, but I don’t think I could drink more than a small glass of Batchers Bourbon Whiskey Port Cask Finish at a time. It’s very sweet, and I felt like the sugariness stuck to the back of my throat a little bit. Even so, It was a very easy drinker, with really mellow flavors and a beautiful warm body. I enjoyed it a lot, but I’m not quite sure I would buy it for that price.