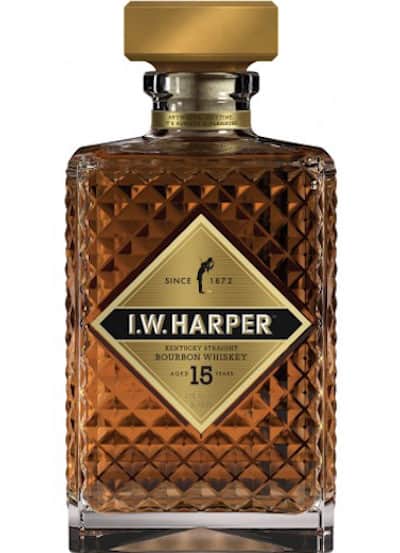 I.W. Harper is kind of a long story.

Back in the late 1800s, Isaac Wolfe Bernheim and his brother, Bernard, founded I.W. Harper Bourbon. Over the years, it received a lot of accolades, even taking the Gold Medal at the Chicago World’s Fair of 1893, thrived during Prohibition, and had its own star turn in a Bond novel and film, “On Her Majesty’s Secret Service.”

As we have mentioned previously, through years of distillery acquisitions and such over the ensuing years, the brand eventually fell into the hands of Diageo, who for the past few decades has limited sales of the American whiskey to Japan and other parts of Asia.

But now it’s back, revived by Diageo.

The I.W. Harper brand offers a four-year bourbon (which we reviewed last summer) and a 15-year bourbon. The 15-year is distilled at the current Bernheim Distillery in Louisville, Kentucky, and aged most recently at the Stitzel-Weller Distillery in Louisville. It’s bottled in Tullahoma, Tennessee. The mash is 86 percent corn, six percent rye, and eight percent barley; it’s bottled at 86 proof (43 percent).

Appearance: The square bottle looks like a prop stolen from the set of Mad Men. I could easily see Don Draper knocking back a couple shots of this stuff. Barring that, rich characters on the soap operas I used to watch back in the ‘80s when I faked being sick so I could avoid other kids. The actual whiskey itself? Golden oak, a warm pumpkin.

Nose: Provolone! Lots and lots of provolone! Blindingly cheesy. On second sniff, it brings to mind this tiny cheese shop I visited once in Edinburgh, Scotland. The shop (a shoppe, really) was about the size of a coat closet, should you be lucky enough to have one in an urban environment. It reminded me of that cheese shoppe—if everyone in it had been barefoot.

However, I will admit that after sitting a little while, the nose also brought forth spiced apples and fresh sawn wood.

Palate: Whey hey! There’s that cheese again! It’s almost like they were going for earthiness, umami, slight chewiness. Striving toward savory. This didn’t work for me. It clings to the roof of my mouth and feels uncomfortably weighted. The finish? chlorine. The feeling of getting pool water up your nose. This is like a bourbon belly flop.

Often, I tend to enjoy whiskey while having cheese. The sharp burn of liquor provides a good balance to its creaminess. But I don’t want them to actually mix in my mouth, from the same product. It tastes like the inside of your mouth after a good night’s sleep during which you’ve drooled on the pillow only a little. In my opinion, it is so not worth the $75 you’d have to shell out for it.

221
Shares
6.7k
Views
Share on FacebookShare on TwitterGet Our Newsletter
Cheers to the Dads! Personalize a bottle of his favorite whiskey to create a modern gift for the modern man. Use code: FATHERSDAY20 for $20 off your next order of $100 or more at ReserveBar