Ladies and Gentlemen, the Fourth Rose! This newest line extension (the first in over 12 years) edits Four Roses ‘standard’ bourbon mingling from 10 recipes to six. The distillery makes whiskey from two distinct mash bills: one more corn, one more rye, and then inoculates with one of five proprietary yeast strains (learn more about their recipes). From the resulting 10 permutations, they select a different collection for each signature product.

Master Distiller Brent Elliot’s goal with the Four Roses Small Batch Select was to give some of the bourbon’s more subtle characteristics a place to shine.  The yeasts used produce delicate fruit, slight spice and herbal notes. This is the first addition to be non-chill filtered, in step with many other bourbon producers. Clocking in at 104, it’s also the highest proof of the permanent line.

All Four Roses bourbons are fermented and cut with water from the Salt River. This river runs over limestone-rich soils and that’s said to offer a crispness to the final product. Four Roses also boasts a single-story rack house where temperature variation barrel-to-barrel is about eight degrees Fahrenheit, giving the whiskey a gentle coddle instead of wide swings.

With a new bottling line and a doubling in distillation capacity (thanks to a capital infusion from its owners, Kirin), Four Roses looks to be in a good spot for keeping the Small Batch Select accessible. Distiller Elliot would like fans to “…Open up that bottle and enjoy it any time.” Rumor has it the balance between the six recipes will change year-to-year and will lean toward the rye-heavy mash bill.

After all the pomp, it’s time to taste some whiskey. 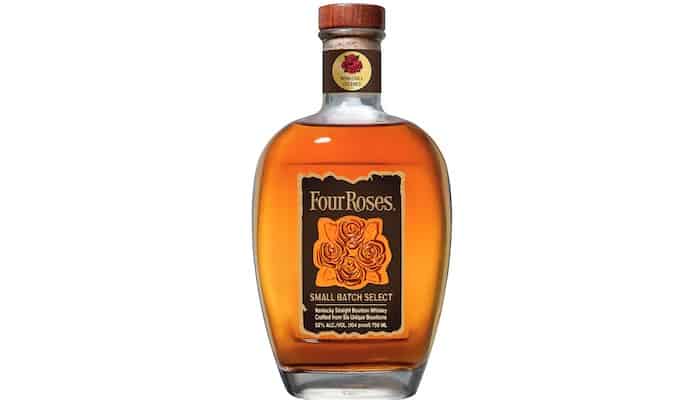 Vital Stats: This whiskey is 104 proof. The mash bill varies, including both 75% corn/20% rye/5% malted barley and 60% corn/35% rye/5% malted barley. It is a blend of six- and seven-year-old liquid. Bottles are 750 mL, ranging in price between $55 and $70. Currently this bottling is available in Kentucky, New York, California, Texas and Georgiaand will roll out to the rest of US from there.

Appearance: Four Roses Small Batch Select is clear, pale butterscotch, the spirit coats the glass and forms quick, fat tears. This sample was presented in a fancy round box surrounded by preserved roses.

Nose: The nose presents aromas of apricot, white flowers and lemon zest, with an undercurrent of clove. Despite the high proof, there’s no aggressive volatility.

Palate: This is subtle and lean. The clove of the nose blooms into nutmeg and develops on the back-palate to black pepper. Surrounding the spice is a round, plummy fruitiness and oregano on the mid-palate. Leather hits on the back-palate. The finish is short and clean.

This is an interesting whiskey. I applaud Four Roses for their experimentation - they succeeded in breaking from course - however the whole experience was a bit underwhelming. I look forward to seeing how this extension evolves and tasting next year’s batch.