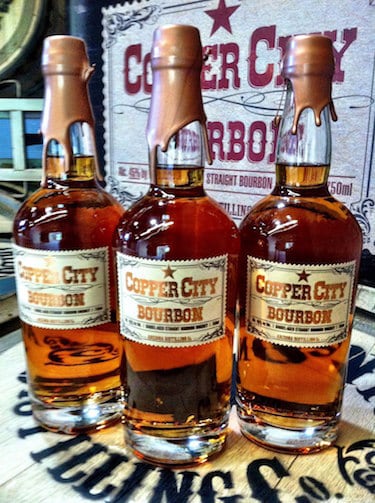 Like many young distilleries, Arizona Distilling Company made their first dollars selling an MGP-sourced spirit: Copper City Bourbon, they called it in homage to early 20th century Arizona beer brewers.

It’s important to distinguish between operations that flip factory whiskey opportunistically (and surreptitiously) from those that make use of sourced spirits to focus on creative blending or finishing, or as a means to keep the business functioning until original products can be brought to market. Whiskey takes time, after all.

Over the last three or four years, Arizona Distilling company has shown that they are among that latter camp of creative distillers with something unique to offer—namely, distilling award-winning spirits in house, including vodka, moonshine, a grain-to-glass wheat bourbon made with desert durum wheat (if you’re thinking of spaghetti, you’re not wrong), a 95% rye whiskey, a gin loaded with northern Arizona botanicals, and an “Arizona Malt Whiskey” made in collaboration with local brewers. They’re not just tinkering around—four of those products have already won awards from the San Francisco World Spirits Competition. Their gin won silver in 2014 and a year later was worthy of double gold.

As for the Copper City Bourbon in my hand tonight, awards have not been in the cards. The bottle reveals it was distilled in Indiana but “produced, aged, and bottled” in Tempe. (One source indicates that the bourbon is now being distilled onsite along with their other products.) I, for one, am interested to discover what happens to a bourbon aged in the desert, even if the contents are familiar MGP stock. The back label copy, by the way, offers the obligatory backstory about some outlaw character from the days of Prohibition.

Palate: Only slightly less youthful—still quite sweet and smokeless. Heavy on caramel and vanilla with a hint of pipe tobacco, pepper, and cinnamon-apple-flavored oatmeal. It’s well-balanced overall, but not remarkable in any particular way.

The bourbon is fine, if not special. In any case, I’m impressed with the operation and eager to get my hands on their more recent concoctions, which do sound like very worthwhile projects.