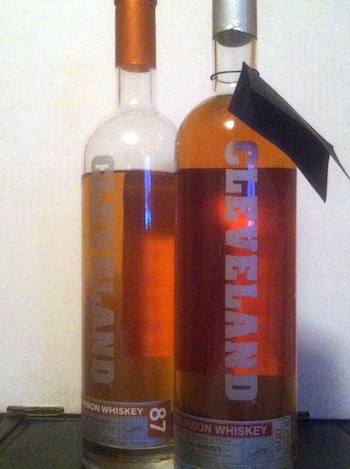 I was given the chance a bit ago to talk with Cleveland Whiskey’s founder, owner, and inventor Tom Lix about his whiskey and artificial aging process in a story here. I then reviewed a unique release of this distillery known as The Uncommon Barrel Selection: Black Cherry. Now we’re going to look at the two standard bottles that Cleveland Whiskey puts out.

Let’s start with the flagship of the brand known as Black Reserve. I happened to receive a bottle from batch 006. Lix bottles this bourbon at 100 proof, which is very clear from the moment you open the bottle. Color for this bourbon is an amber-gold which is a bit lighter than previous releases as the whiskey got its name from its original deep color.

The nose of Black Reserve is pretty unappetising as it is much like sniffing acetone. There is also an undertone which I can’t place which gives the impression this will be a sickeningly sweet bourbon. Once the alcohol settles a bit you get a touch of corn and oak, but they’re fairly subtle and that odd scent is still present.

On the tongue the bourbon gives an immediate honey tone, then it is charred oak. If you’ve ever tasted a whiskey that has spent far too much time is the barrel it’s pretty similar. The finish is just a burning sensation that does not sit pleasantly. Any other notes are either non-existent or completely covered by the alcohol.

My overall score for this bourbon is 65. Even at a fairly industry standard $40 a bottle (you can hunt down a bottle online here), I just don’t think it’s worth drinking. There are just to many better 100 proofs you could be drinking.

The other standard release from Cleveland Whiskey is called “The 87.” This name was taken from the bottle’s proofing, which is 87 proof. The color is a fairly light gold, closer to what I’d expect from a “year old” bourbon. The tastes and smells follow suit. I’ve done a few different tastings over some time and am a bit surprised on how simplistic this bourbon is.

The nose on this bourbon is a fair mix of roasted corn, vanilla, leather and ethanol. When the alcohol dissipates a bit it, it has notes of orange peel and baking spices.

The palette gives off large amounts of corn followed by oak. Any sweetness or common vanilla tastes seem to not exist in this bottle. The feel is rather creamy and coats the inside of the mouth for a lingering aftertaste. As for the finish, it’s fairly the same. Mostly corn, wheat and oak come through. It also has a much more pleasant burn than the Black Reserve.

Overall I’d give this bourbon an 79. It’s drinkable, moderately priced at just under $40 dollars (you can hunt down a bottle for sale online here) and fun to talk about, but can be just as easily passed over. If you’re looking to see what modern technology can do with our favourite spirit, I’d recommend this bottle.