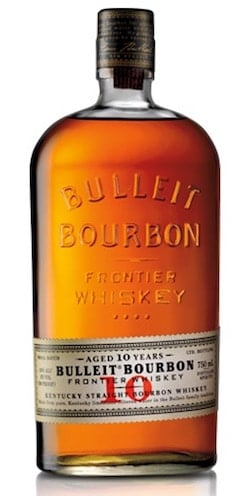 When I first started drinking bourbon, I didn’t know what I was doing. Mainly, I drank bourbon in Manhattans. And the safe, guaranteed good bet for those Manhattans was Bulleit.

Since then, my whiskey collection has grown to 60+ bottles. I’d like to say that Bulleit has a special place in my heart (or palate), but it also has that “first boyfriend” quality. You know that involuntary, embarrassed yet quaint feeling when a certain someone comes to mind? There’s nothing wrong with Bulleit—far from it—but lately I’ve been thinking of it as more like a gateway bourbon.

(Or have I just become a terrible snob? Quite possibly.)

So when I got a sample of Bulleit Bourbon 10 Year Old, I was curious what its extra four years of aging would bring. As Diageo’s first bourbon brand (though no longer its only), I wondered if it would get additional love. (You never forget your first.)

Bulleit 10’s mash bill of 68 percent corn, 28 percent rye, and 4 percent malted barley doesn’t change, though its slightly higher proof (91.2 vs. the 90 proof of regular Bulleit) is likely reflective of the additional time in charred American white oak barrels. Also, like regular Bulleit, it is distilled by Four Roses in Lawrenceburg, Kentucky.

Nose: At first, Bulleit 10’s nose is light and inoffensive, subtle to the point of indiscernible. Even a little dull. Eventually I notice smoke—not on the palate, but on the nose — after it sits a bit. (The bourbon, not my nose.)

Palate: The extra four years does give the Bulleit 10 a slight edge, with more of that smooth vanilla and cinnamon I get with regular Bulleit. I like a high-rye bourbon, so it’s nice to have that consistency.

Finish: It hits kind of high up, almost in my sinuses. It’s strong but not too strong, with echoes of wood, more vanilla, and dried apricot.

Like its orange-labeled sibling, this is a solid, serviceable bourbon. But the two don’t differ all that much. An informal side-by-side tasting confirmed my doubt that it’s worth the extra $20 or so (Bulleit is about $25, the 10-year around $45-$50).

In this case, patience isn’t really worth it. If you want a sipping whiskey, look elsewhere, and if you want your Bulleit in a drink, go for the cheaper one. It’s not bad at all, but it serves as a lesson that there are plenty of brown liquor fish in the sea.