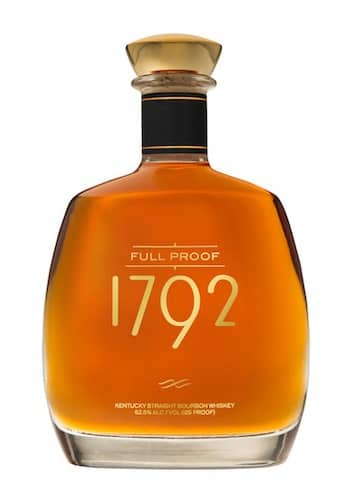 The bourbon now labeled 1792 Small Batch you might recognize by its previous name: 1792 Ridgemont Reserve. Originally (that is, in 2002), it was dubbed Ridgewood Reserve until a court determined that title to echo Woodford Reserve a bit too closely, at least for customers who drink a lot of bourbon. But the numerals remain—a hat tip to the year Kentucky joined the union—and this bourbon is still made at the Barton 1792 distillery in Bardstown (owned by Sazerac since 2009).

What’s new, though, is a series of four special 1792 varieties: sweet wheat, port finish, single barrel, and the full proof version in my glass at the moment. This one is bottled not at the strength it comes out of the barrel, but at the original 125 proof at which it went into the barrel.

Whereas high-proof bourbons are typically best sipped after adding a bit of water to open up the subtle flavors otherwise obscured by alcohol, the 62.5% ABV of this one somehow manages to highlight flavors rather than overwhelm them. I can’t explain how or why that happens, but it’s a thrill. Yes, this bourbon is full of fire, but I find that while it lights up my sinuses and lungs with alcohol vapors, it has a very gentle, viscous mouthfeel, such that my tongue starts tingling only after I’ve experienced the dram’s powerful flavors.

Just as an especially sharp, acidic cheddar intensifies everything you love about cheddar, this bourbon tastes like a more extreme version of itself—that is, it offers all the classic bourbon notes, but serves them up with more richness, more drama, and nary a hint of subtlety. You won’t be tempted to knit your eyebrows and smack your lips while meditating on an especially inconspicuous flavor you may or may not have perceived. No, the flavors here aren’t delicate, but that doesn’t mean they’re not complex—there’s a lot going on, from rye spiciness to sweet caramel-corn to smoky, woody notes.

Appearance: Burnt amber with an orange hue. Legs for days. This is sticky stuff.

Nose: I’ve never had a grilled caramel sandwich topped with cinnamon, but now that I’ve considered the possibility, I’m going to make it happen. Anyway, that’s what it smells like. There’s the soft aroma of fresh baked goods along with cornbread sweetness and a dusting of spice. And a little smoke. Someone burned a yeast roll.

Palate: All the flavors. Seriously. All of your favorite bourbon flavors are in here somewhere: caramel, oak, vanilla, smoke, corn flakes, molasses, cinnamon, and even chocolate-covered roasted coffee beans. A creamy, buttery mouthfeel ties it all together. The finish seems to last forever in the form of tingling on my tongue, on the roof of my mouth, and the inside of my cheeks—not to mention a bit of burning in my gut (this is full proof, after all). But I enjoy every bit of it. I guess it lacks fruitiness—more caramel than caramel apple—though there’s a  fresh cherry flavor toward the finish. The high alcohol content is recognized by the way it burns its flavors into your mucous membranes so intensely, but without any obnoxious notes of rubbing alcohol.

It reminds me of Elijah Craig on steroids. I probably wouldn’t want to sip on such a monster every night, but I’d certainly like to have it on my shelf when the right mood hits me, and I’d be eager to share a taste with friends. In the search for bourbons that stand out in the crowd, this one is a special find.