When Visiting Maker’s Mark, Don’t Trust A Smartphone To Get You There

There are two ways to get to Maker’s Mark Distillery, located outside Loretto, Ky.: Drive the route detailed clearly on Maker’s website; or trust your GPS to take you “the fastest route.”

I promise you, the second choice is not the best.

That’s because “fastest route” isn’t really a single way. Depending on the make of your GPS or phone and what app you use, or even that day’s weather, “fastest route” is a yet-to-be-determined number of “No way in hell this is right!” paths that will leave you guessing but eventually get you there.

I’m not the only one who’s arrived at this gorgeous distillery via the twistiest and tightest back roads. On my first trip to Maker’s years ago, I’d quit using printed directions to go anywhere and let my smartphone do the talking. And as it led me past, not through, Bardstown, Ky., I knew something was wrong. 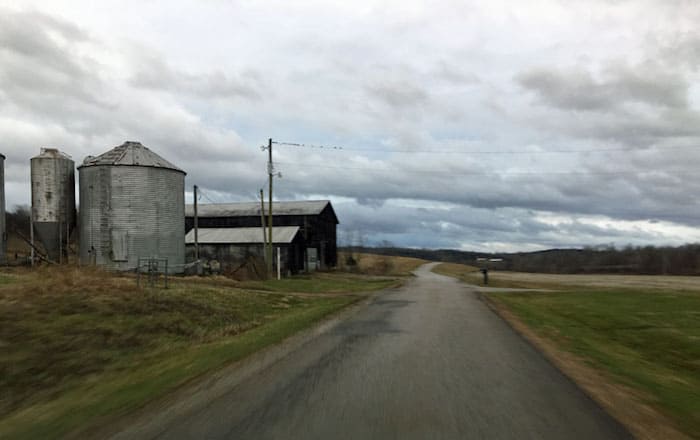 Is this the right way to Maker’s Mark? (image via Steve Coomes/The Whiskey Wash)

Four lanes quickly gave way to two, which then funneled down to one. I went down roads so narrow that leaves on bushes, lush with summer growth, brushed the sides of my already skinny Honda Civic. No wheeled box tour buses could’ve negotiated what were little more than paved cattle paths, and I was certain I was lost. Yet as happens on the magic roads to Maker’s, I made it. I wasn’t sure how, but I got there—and promptly asked a human for the correct directions back home.

Sadly, I’ve not gotten any better at getting there on subsequent trips. In my past four visits—sometimes with me behind the wheel, sometimes another—I’ve made it via three different routes. One chipper sidekick, the kind who doesn’t mind getting lost, brushed off my growing irritation over the confusing directions with a “the backroads are so scenic, so enjoy the ride,” trope.

Truth be told, the view is a lovely one. Depending on which mystery route your GPS chooses, you’ll see dozens of species of trees, endless green rolling meadows, a half dozen types of beef cattle lowing in the fields and roads named after families who own the land over which you’re driving. The vista makes you relax … until your smartphone says, “Proceed to route. Proceed to route.”

You wonder aloud, “How’d I get off the freakin’ route in the first place?” and then you realize it happened miles back when you lost your cell signal at the base of a modest valley, and, “Clearly, cell signals don’t bounce off beef cattle!”

Fortunately, about the time you start thinking, “I’m driving to a distillery when I could get all the same whiskey on a store shelf somewhere?” your phone chirps the good news: “In 1.4 miles, the destination is on the right.” For a short distance, you ride alongside Hardins Creek, wishing you had a fly rod and waders handy, before the dark visage of Maker’s newest whiskey still house and grain milling building take shape in the distance.

Excitement returns and you’re glad you’ve decided to visit this Whiskey Disneyland and bask in its country charms. But from this angle, the distillery looks more like a 19th century reformatory than a whiskey making operation. It’s neither pretty nor inviting like the black and red trimmed buildings pictured on its website, quaint structures wreathed in fog or bathed in sunlight. This is the service end of the complex, the spot where 18 wheelers line up to disgorge their grain loads, not the tourist end where buses dispatch visitors.

Soon enough, you see a sign pointing toward a guest parking lot. This road is wide and paved to a smoothness rivaled only by Maker’s bourbon. As you park, stretch your legs and look around, you notice other cars coming in from the north … which makes you feel stupid because you trusted your phone, which brought you in from the east on a rally racing course, not a pothole free and lined macadam ribbon.

If you ever visit this grand distillery, trust me and print out the directions and enjoy an anxiety-free trip, or figure a way to override “fastest route” and drive through Bardstown and Loretto. It’s not quite as bucolic a path as the back roads, but at least you’re certain where you’re going.