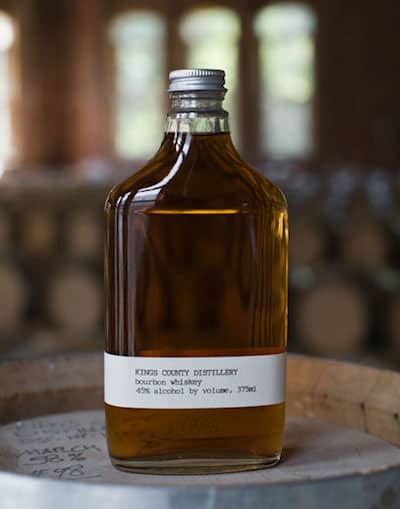 Brooklyn has had its share of distilleries.  Sometimes, too many.  In 1869, the IRS commandeered 2000 soldiers and marched into Brooklyn, intent on destroying dozens of non-tax-paying distilleries.  For several months, the whiskey wars raged, with distillers rebuilding as fast as they were torn down.  It’s fascinating history, and brings a certain rebellious pride to the presence of New York City’s oldest whiskey makers – Kings County Distillery.

Because of Prohibition and the resulting legal prejudices, it took one hell of a bandwagon to soften New York City’s alcohol laws. Kings County Distillery was the first to benefit, and has been around since, well, 2010.  Intent on recreating a vibrant – if more law-abiding – whiskey industry in the historical heart of Brooklyn, Kings County Distillery does everything by the book.  Classic recipes are distilled on imported Scottish copper stills.  Although their current building looked out on the whiskey riots of the late 1800’s, the view now is of a small plot of home-grown corn and barley.

This independent spirit is the core ethos of Kings County Distillery.  As they proudly declare in their literature, “We only distill whiskey for our label and we never buy bulk whiskey from any other source.”  Very New York City.  The Kings County bourbon for this review is also a classic, featuring a 45% abv offering in a flat 5th bottle, available for around $24, give or take regional taxes.

Appearance: This bourbon is as shiny as a new penny, with moderate legs that stripe the glass on their descent.

Nose:  The nose is sharp, with turpentine, lemon oil and toffee.  It smells young – a bruiser, rather than a crooner.

Palate: Wood forward, the flavors are tannic, from straw to wood, through banana and imitation vanilla.

Finish: The finish is bitter, with nutmeg peeking through, before the tannins come on even stronger.  An impression of slick sweetness on the fade, with residual ethanol.

For a first offering, the Kings County Distillery bourbon has a lot of growing up to do.  It is not a terrible dram, but it falls short on several levels. Perhaps letting the spirit age a bit more would overcome some of the brashness exhibited by this bourbon. There’s a rich whiskey heritage in Brooklyn for this “oldest distillery” to discover. Perhaps an independent spirit is required to start something, but for the long game, nothing beats experience.

I score Kings County Bourbon 75 points. You can hunt down a bottle of it for sale online through some of these liquor retailers if you wish.