Port Barrel Finished Bourbons: The Tasty Treats They Are

Port wine, though something made by a fair number of American wineries, is a drink mostly associated with a long and storied history out of Portugal. Bourbon, meanwhile, is the American workhorse whiskey. How is it then these two radically different forms of booze cross paths?

Wine cask finished whiskies, as we’ve explored before, most commonly take the form of sherry cask aging. Beyond sherry, one sees other fortified wine types as barrel choices, including madeira and port. Regardless of the wine type, however, the barrels chosen for either exclusive or additional maturation retain elements of their former inhabitant, which can then be carried over to the new resident in smell, taste and color. 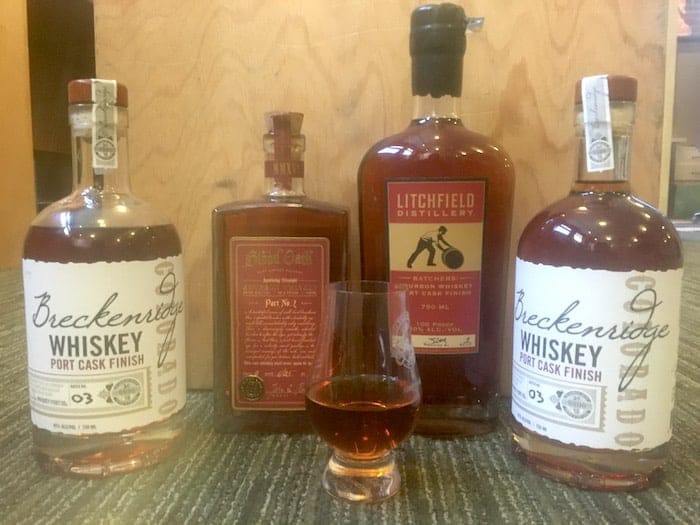 Whereas it is common to see the likes of Scotch influenced by these ex-wine barrels, American whiskey, particularly bourbon, isn’t as much of a common play yet. That’s changing though, particularly in the interplay of bourbon and port. To learn a little more about how and why distillers are exploring this area, we reached out to Ted Pappas of Big Bottom Distilling out of Oregon for more details. Big Bottom is known as a leader in bourbon wine cask finishing.

The Whiskey Wash (TWW): Why is port cask finishing a choice for bourbon? What is it that’s interesting about it?

Ted Pappas: I think it’s the nice dryness of the port that goes well with a sweeter bourbon.  They put each other in balance.

TWW: What do ex-port barrels impart into the bourbon in terms of taste and color typically?

Pappas: Depends on how long you finish them for.  We are big on extending our finishing time to really capture that color from the barrel.  For taste, we owe the winemaker respect and want part of their product to transfer into ours.  You will get fruit, and tannins, that compliment the spirit.  Balance is key.

TWW: Is there a difference in the quality of port barrels sourced from domestic wineries versus Portugal for bourbon, or is that not really a factor?

Pappas: Yes, it’s all a factor.  For those who think it’s just putting booze in another barrel, they are so wrong.

Pappas: It is up to the port and what you want out of it.  I’ve seen as short as three months and [some that’s] gone a hell of a lot longer.

As you can see, there is some rhyme and reason to the crossing of bourbon and port. In the current marketplace, the biggest player so far of port cask finished bourbon on a steady basis is Angel’s Envy which, like many others in this niche at the moment, makes use of sourced bourbon as a base. Beyond that you will tend to generally find a host of one-off or limited-edition expressions on store shelves, rather than a regular supply from a single distillery.

We’ve listed some examples of producers involved in this interesting trend, along with a little bit of information, as is available, specific to their ex-port barrel use. What we’ve tried to represent here is what’s current to market as of the time of this article was posted.

Angel’s Envy: Quite simply the big player of the port-cask finished bourbon movement. Widely available. Blends batches of eight to 10 barrels of bourbon at a time, typically aged for up to six years, and then finishes the whiskey in 60-gallon ruby port barrels made from French oak and imported directly from Portugal. Typical finishing time is between three to six months.

Barton 1792: This Sazerac-owned distillery out of Kentucky first ages its limited-edition 1792 Port Finish Bourbon “for many years” in typical new white American oak barrels. The bourbon is then transferred to port barrels upwards of two years for further aging. Very limited availability.

Ascendent Spirits: A distillery set in one of California’s wine country regions, Ascendent is known for its Breaker Bourbon. They take advantage of their location among the wineries, sourcing their port wine barrels from a local winemaker for secondary aging. Breaker Bourbon Whiskey Port Barrel Finished is a limited edition expression and thus has limited availability.

Big Bottom: One of the better known of the wine cask finishers, Oregon’s Big Bottom has had its Straight Bourbon Whiskey, Port Cask Finish, on the market in small amounts for a few years now. The 36% rye bourbon is finished in a Tawny port barrel for six months. There is a little bit of it left at retail right now.

Breckenridge: This Colorado distillery takes its flagship Breckenridge Bourbon, always made from a high rye mash bill and aged for a minimum of three years, and finishes it in port casks from an undisclosed source. Very limited availability.

Traverse City: Housed in Northern Michigan, Traverse City looks to have recently brought to market a port barrel finish. There’s nothing overly fancy about the bourbon they source in of itself, but the port variant makes things interesting because the distillery puts the whiskey for upwards of three months in ex-port wine casks acquired from the Kedem kosher winery out of New York. It is a very limited edition offering.

Litchfield: Litchfield Distillery describes itself as being nestled in the hills of northwest Connecticut. For their port cask finish they take their eight-year-old sourced bourbon and drop it into port barrels for an additional half of a year. It is another which just came to market very recently, so availability is extremely limited.