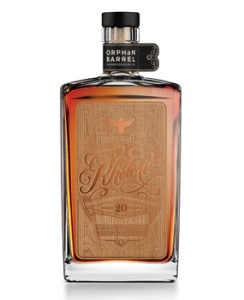 Editor’s Note: Since no official artwork for the 21 year old Rhetoric is out from Diageo yet, we’ve opted to recycle the 20 year old image we used last year for this story (though images are popping up on Twitter – see below). We will change that once a picture is provided.

Diageo’s Orphan Barrel project, love it or hate it, has stirred up quite the discussion since it debuted last year around strong consumer desires focused on anything whiskey with an older age statement. While some of the bottlings are one-off releases others, such as Rhetoric, aim to be more once a year shots into retail markets. Last year we saw Rhetoric as a 20 year old bourbon, and though there’s no official word from Diageo yet, I’ve noticed a whole bunch of 21 year old has started trickling over the last few weeks into liquor stores.

The Orphan Barrel Rhetoric 21 Year Old, with an average retail price of $129 as of this post, looks as if it will be the second of six planned under this particular name from what I can tell over at its website (the oldest listed there is a 25 year old scheduled for a 2019 release). What Diageo is doing here with Rhetoric by staggering its stock over the years is, according to them,

an experiment in how barrel maturation imparts a lasting impression year after year. Each new year results in an older and wiser limited release from remaining maturing stock.

From what I can tell from label checks of a couple of retailers with actual pictures of the 21 year old posted online (see below), this new Rhetoric looks to be bottled at 45.1% ABV. This is slightly above last year’s offering, which clocked in at 90 proof. Nothing else looks different for the most part on the front label otherwise, apart from the number 20 being replaced with 21.

Tasting notes presented on the back label, BTW, indicate this bourbon “begins with an oak wood nose, translating into ripe banana, clove and anise taste and concludes with a long finish of woody, dark chocolate.”

Do you see yourself going for a bottle of the 21 year old? It might be interesting to compare it side by side with the 20 to see what’s different between the two. I’ve got a bottle on order and we will do such a review once it arrives, so stay tuned!