Recently, someone I know asked for recommendations for a gift for a “bourbon-loving friend” in the $100-$150 price range.

First, I’m happy to report for those who don’t know, that despite bourbon’s current popularity and consequent increase in prices generally, $150 is still a princely sum to spend on a bottle of bourbon. You can, of course, spend as much as you want. Instacart recently offered me (unsolicited) a bottle of Pappy Van Winkle 20-year-old for $1,950.

But back to that $100-$150 range. If the store where you shop has any bourbons in that price range, the likely justification for the price is age. Anything aged more than 12 years probably will be rare and expensive. 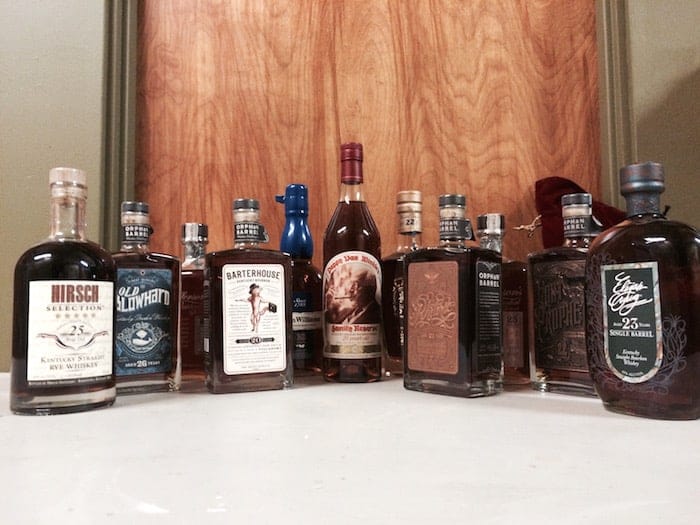 Some American bourbons and ryes in the 20+ year category. (image copyright The Whiskey Wash)

But buying that 20-year-old something (not Pappy) might be an expensive mistake? Why? Because very old bourbons, while they have a following, don’t appeal to every bourbon drinker. I know, because I’m one of those people. They are a very different taste.

I don’t seek out very olds because I usually don’t like them. They’re too woody, too acrid, too sooty. The wood overpowers everything else. In most cases, the whiskeys are not balanced.

This applies to most limited edition releases, which is just as well since they’re rarely available when you want them to be.

There are exceptions. The George Dickel Bottled-in-Bond is very drinkable at 13-years-old, reasonably priced at about $40, and generally available.

If you’re shopping for a gift, and this is by no means limited to bourbon, it helps to know some of the products your recipient normally enjoys. If they tend to like the very olds then great, but if their taste runs more to standard bottlings then the most appreciated step-up might be something in the same range. Age-wise, the sweet spot for me is eight to twelve years. Most people who like a good solid four- to six-year-old will like that same recipe in an eight- to twelve-year iteration. So give the Jim Beam drinker a nice bottle of Knob Creek, give Kentucky Spirit to the Wild Turkey drinker, and so on.

The ‘older is always better’ myth persists. You know better.

77
Shares
47.5k
Views
Share on FacebookShare on TwitterGet Our Newsletter
Cheers to the Dads! Personalize a bottle of his favorite whiskey to create a modern gift for the modern man. Use code: FATHERSDAY20 for $20 off your next order of $100 or more at ReserveBar