Fred Noe, is his role as the current master distiller of Jim Beam’s American whiskeys, has been showing the ropes for sometime now to his son and 8th generation Beam family distiller Freddie Noe. The younger Noe’s talents have best been showcased in his Little Book releases in recent years, and now father and son have done their first ever collaboration together.

The new Jim Beam Lineage, according to those behind it, is a batched premium bourbon expression that will be exclusive to travel retail. Crafted by the Noe father and son distilling team, it is a 15 year old whiskey that was aged in charred white oak barrels in Warehouse K since 2004, being recently bottled at 110 proof. 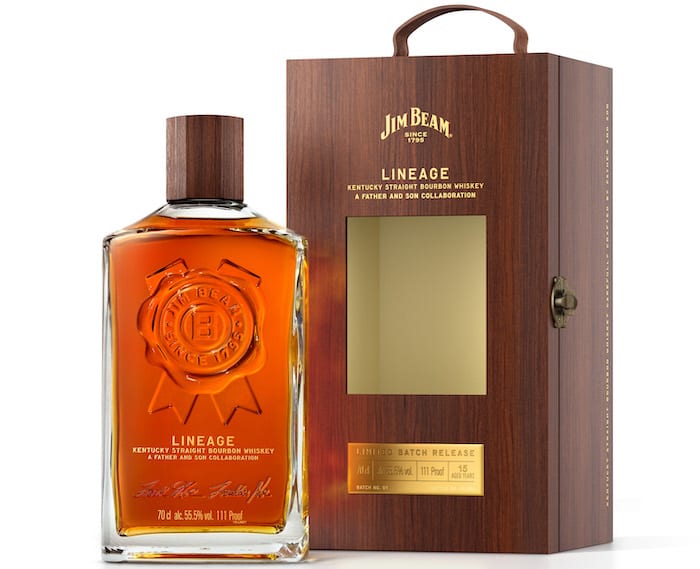 “Lineage represents a significant moment in the history of Jim Beam,” said Fred Noe in a prepared statement. “Not only is it a collaboration between the seventh and eighth generation of distillers in our family, but it’s a blend of the past, the present and the future.

“Having spent a lot of time exploring travel retail outlets in my time, it was important to me to offer something special to travellers – especially during these trying times. Launching a product exclusively to travel retail is not something we often do, so we are excited to bring such a unique expression to our friends in airports across the world.”

“I really enjoy breaking the rules and creating new and exciting expressions,” added Freddie Noe, “so it was an honour to create this unique whiskey with my dad – one that’s different from anything out there in the bourbon world.”

Plans call for Lineage to be a travel only retail offering starting in early 2021 for around $250 per bottle. There was no mention of whether it might become a domestic release at some point. Very limited official tasting notes suggest “spice, vanilla and caramel, ensuring it is perfectly balanced and has a smooth, warm finish.”