“When I started Proof and Wood in 2015, the goal was to bottle great spirits and work with like-minded people,” said Dave Schmier, owner of Proof and Wood Ventures, in a prepared statement. “Mike Cherner, friend and president of Prestige-Ledroit Distributing, immediately challenged me with a new project. Being a lifelong resident of the D.C. area, Mike thought it would be fun to celebrate the inauguration, which was always a great party for residents and guests of Washington, D.C., no matter which candidate prevailed.

“The challenge was to find American whiskey barrels that were at least four and eight years old, and label them one term and two term. Thus the Presidential Dram and the D.C. series was born.” 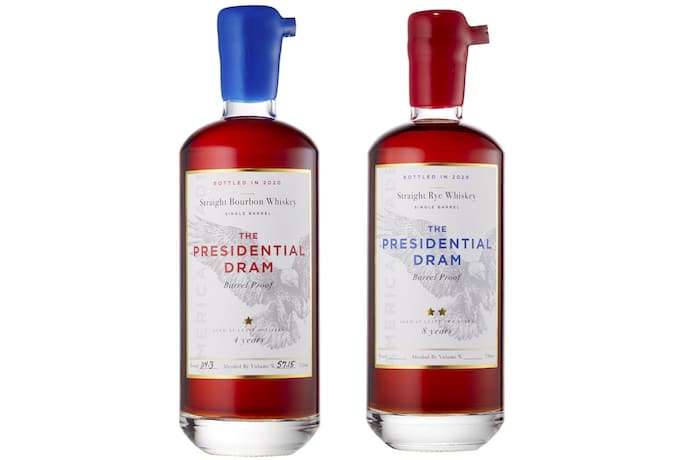 Both whiskies were distilled and aged at MGP of Indiana, the Lawrenceburg, Kansas distillery that has been in operation since 1853. The One Term Presidential Dram Straight Bourbon was aged for at least four years and boasts a mashbill of 75% corn, 21% rye, and 4% barley, while their Two Term Dram Straight Rye was aged for a minimum of eight years, with a mash bill of 95% rye and 5% barley. Both expressions are non-chill filtered.

The first release of this Presidential Dram series was bottled to coincide with the 2017 inauguration. And these new bottles join the other entries in Proof and Wood’s D.C. Series, including The Justice, a straight bourbon whiskey aged for at least 14 years in new charred oak barrels, and The Representative, a small batch whiskey aged at least four years.

While the bourbon is sealed with blue wax, and the rye with red wax, Schmier insists that this is not an attempt to market one bottle at Democrats and the other at Republicans.

“We aimed to celebrate an important moment in American tradition, without any additional political party affiliation,” Schmier said. “We feel the most heated debate in American should be bourbon vs. rye. And unlike political voting, in this case, you can choose both.”