The Colonel E.H. Taylor bourbon line, produced by Buffalo Trace, has among the bottlings that have come from it over the years some extremely collectible limited edition releases that typically sell out rather fast at retail and can command high dollars on the secondary market. A new approved bottle label which has surfaced in the last few days through the federal government’s Alcohol Tobacco and Trade Bureau (TTB) liquor label database (COLA) suggests another such bourbon is on the way.

The Colonel E.H. Taylor 18 Year Marriage Straight Kentucky Bourbon Whiskey, which appears as the name of this new possible release (labels that appear on the TTB COLA registry don’t always mean a product will actually be released), is a rather interesting combination of American bourbon barrels “from three signature mashbills that matured for eighteen years, including two different rye bourbon mashbills and our wheated mashbill.”

Going further on via the back label Buffalo Trace says of this possible release that “the marriage of bourbon mashbills gives this magnificent whiskey a nose of vanilla butter cake, a rich palate of caramel and cinnamon, and long finish of toasted oak, cinnamon, and a hint of spearmint.” 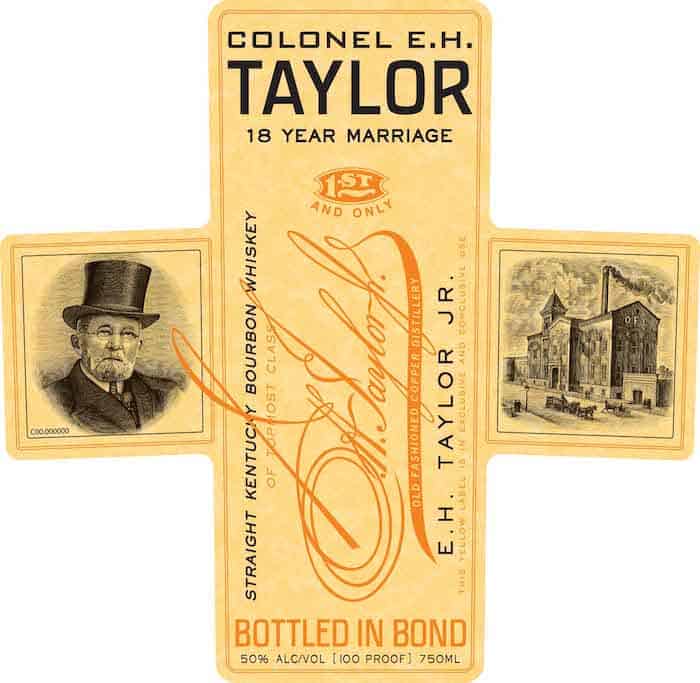 The whiskey is noted as being Bottled-In-Bond at 100 proof (50% ABV), which is keeping in line with the typical Taylor offerings. Also, as is typically the case with COLA label postings, pricing and specific release dates are not mentioned. It has been said in some online forums that the distillery has already spoken publicly of this release, and that it might pop in summer/early fall 2020.

The back label of the proposed Colonel E.H. Taylor 18 Year Marriage Bourbon (image via TTB)

Assuming this is a legitimate release, we will have a new release story posted as soon as Buffalo Trace puts forth official information about it.