Saint Liberty Whiskey is a new American whiskey company interested in telling stories of pioneering women bootleggers. For its first bottling it has chosen to showcase the tale of one Bertie “Birdie” Brown out of Montana, and the whiskey it is tying to this is known as Bertie’s Bear Gulch Straight Bourbon Whiskey.

Bertie’s Bear Gulch Straight Bourbon Whiskey, according to those behind it, was triple pot distilled in a distillery near Austin, Texas from a mash bill of 70% Texas corn, 27.5% Saskatchewan rye, and 2.5% malted barley from North Dakota. It was then aged at least four years in new white oak barrels before being shipped at barrel strength to a partner distillery in Lolo, Montana for final proofing. 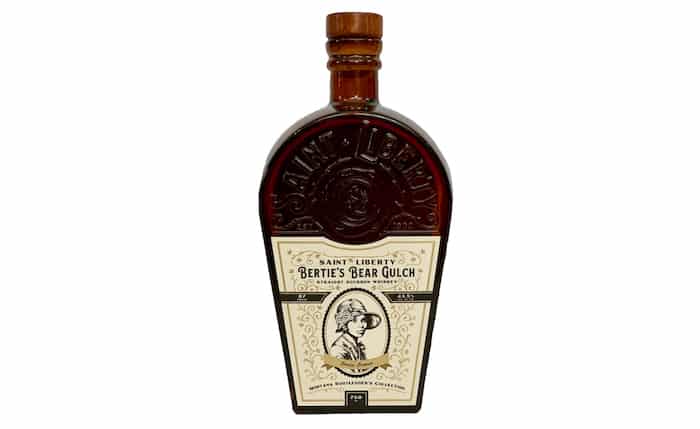 As for the story of Bertie Brown, it goes something like this, according to those behind this label:

Bertie Brown – known as “Birdie” to her friends – was a woman of great courage and determination.  She arrived in what was then the Montana Territory in 1898 from Missouri, a young, single, African American woman determined to make it on her own.  She homesteaded alone along the banks of Brickyard Creek in Fergus County and built a reputation for offering locals and travelers alike a hot meal and comforts of home.  Famous for the warm hospitality of her legendary parlor, Birdie carved out a niche for herself during Prohibition by brewing what locals called the “best moonshine in the country.”  Her entrepreneurial spirit and determination to survive in a rough and wild frontier speaks to the tenacity of women and their willingness to do what it takes to survive and prosper.

Sadly, Birdie didn’t live to see the end of Prohibition.  In 1933, a revenue officer stopped to warn her to stop production of the illegal spirits she had become famous for.  As she multitasked through the distraction, fumes from the gasoline she was using for dry cleaning was ignited by the flames from her latest batch of hooch, resulting in a kitchen explosion that left Birdie severely burned.  She died shortly after the explosion, but her immortal spirit and never-ending kindness lives on in Saint Liberty Bertie’s Bear Gulch Straight Bourbon Whiskey.

Beyond the rather interesting back story of the person this bourbon was made in honor of, what is also of note is the rather unique round-shouldered bottle said to be inspired by the antique bottles of the American frontier. One such bottle was purchased by this brand’s founder, one Mark SoRelle, and he used this to model the bottle this whiskey is housed in.

Said to be best enjoyed sipped neat or in a classic whiskey cocktail like the Old Fashioned, Bertie’s Bear Gulch Straight Bourbon Whiskey is now available in Texas with a suggested retail price of around $45 for a 750 mL bottle.  The warm amber colored whiskey is 87 proof. Limited official tasting notes suggest “flavors of caramelized vanilla, apricots, and just a hint of brown sugar resulting from the low percentage of malted barley.”