Tattersall Distilling, founded in Minneapolis, Minnesota over five years ago, already has a large array of products on shelves, showcasing over 30 all natural spirits and liqueurs available across 30 states. One particular category it hasn’t represented to date, however, are bottled-in-bond whiskeys. This has now been remedied with the recent launch of two new expressions.

The new Tattersall High-Rye Bourbon and Tattersall Wheated Bourbon, according to those behind them, represent the first bottled in bond spirits made in Minnesota since before Prohibition. Both bourbons are made from local grains and have been aged in Minnesota white oak barrels between four and five years. They also are the first two such whiskeys released to the public after nearly six years of operation. 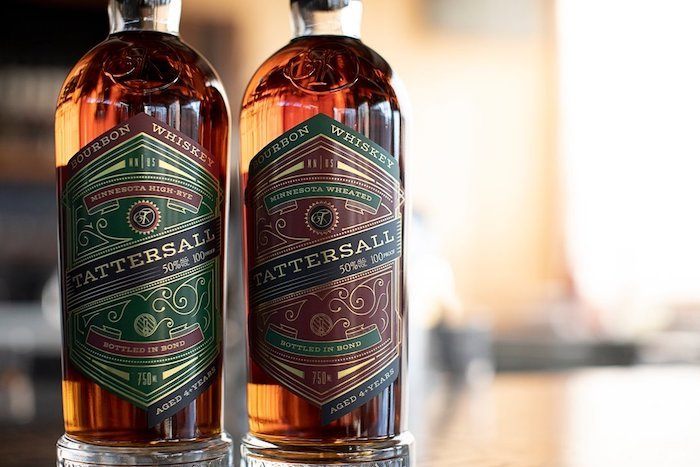 “It’s been a true test of patience waiting for our bourbons to mature — and we couldn’t be happier with the results,” said Jon Kreidler, founder and chief officer of Tattersall Distilling, in a prepared statement. “It’s a thrill to be the distillery that brings bonded bourbons back to Minnesota, and to do so with two that are distinctly different.”

Both limited edition expressions, which are available now, are bottled at 100 proof, or 50% ABV, and priced around $50 per 750 ml bottle throughout Minnesota. Official tasting notes for the High-Rye indicate “notes of black pepper, graham cracker and dried fruit,” while the Wheated’s tasting notes indicate “hints of sweetness with caramel, vanilla and stone fruit undertones.”

Bottled-in-bond, for those unfamiliar with it, basically means a whiskey or other spirit that “is one made according to the U.S. Bottled-in-Bond Act of 1897. ​The designation denotes that the spirits are the product of one distillery from a single distillation season, are bottled at 100 proof or 50% ABV and have been aged for at least four years in a bonded warehouse.”